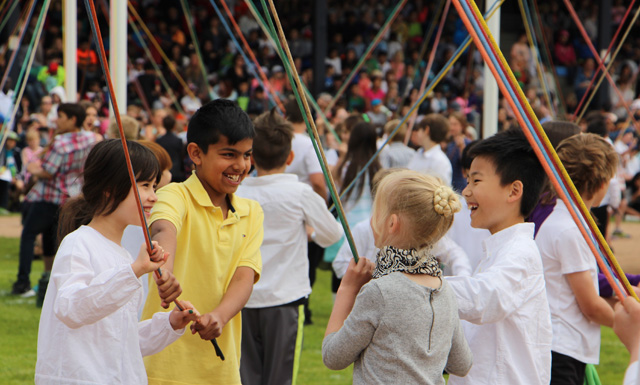 This month marks the 148th May Day in the City of New Westminster.

Once again, city festivities will  feature several traditional events – including the May Day International Parade hosted by the Hyack Festival Association, and May Day dancing in Queen’s Park with New Westminster Schools.

The school district event takes place on Wednesday, May 23.

The school district festivities will take place from 11:30 a.m. to 1 p.m. at Queen’s Park stadium.

“It’s a big day, “ said Karen Catherwood, principal of École Qayqayt Elementary School and one of the key organizers of the district event. 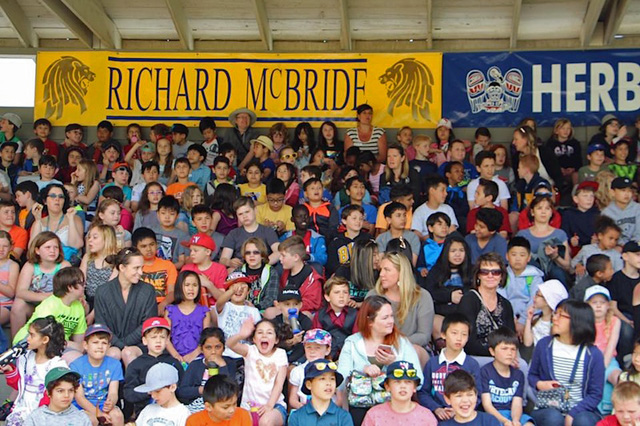 About 950 grade 2 and 5 students gather in the stands to witness May Day dancing and the crowning of the May Queen.

Garlands, circle dances, and the crowning of the May Queen

“Our students will have spent two months of preparations for this day, practicing their dances two to three times a week in each of our schools during gym time,”  said Catherwood. For the eight schools involved, it’s a major focus every spring.

The Maypole dances are a tradition associated with various European folk festivals and involve circle dances and intricate steps weaving multi-coloured garlands around a tall, 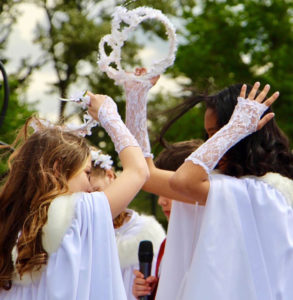 colourfully decorated wooden pole. These will be performed by grade 4 students.

Folk dances – to the traditional nursery rhyme “Nuts in May”  and the English country dance tune “Gathering Peascods” – are performed by grade 3 students.

In addition, two grade five student representatives from each of seven elementary schools and one middle school serve as the Royal Suite. They will host this year’s event, introducing the dances and sharing a history of May Day.

The ceremony includes the crowning of the 148th May Queen. Earlier this spring, Betty Sutton was named May Queen and Liam Banziger the Royal Consort. Both are from Connaught Heights elementary school.

The Royal Suite students are coordinated and supervised by community volunteers, and will participate in numerous other community events –  including the City of New Westminster’s May Day Banquet, Community Heritage Picnic dances, a  May Day Tea run by the Hyack Festival Association, and the Hyack Festival’s International Parade. 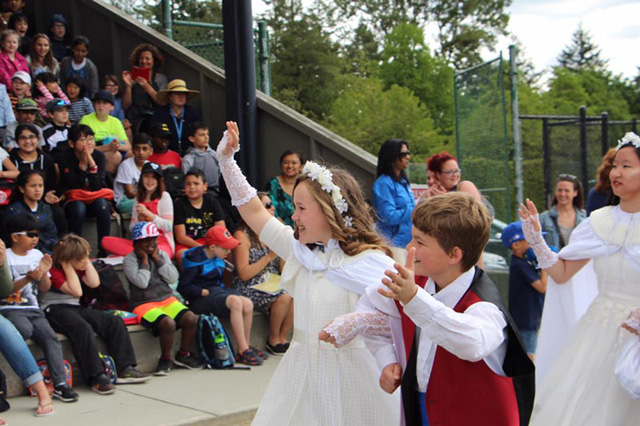 The Royal Suite is made up of  grade 5 student representatives from eight schools who participate in the school district event as well as numerous other community May Day activities.

Significant preparations for a major event….

Catherwood has been involved in the May Day district event for 29 years and has served on the district’s May day committee for 14 years. This year she and vice-principal École Qayqayt Vice-Principal Ardyth Moorcroft volunteered to take on the task, starting in February, of organizing the activities. 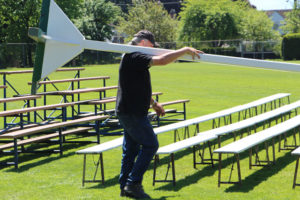 Some of the logistics include working with the City of New Westminster’s Parks and Recreation, which prepares the grounds and sets up the sound system and bleachers. The school district’s maintenance and operations staff set up the maypoles and work collaboratively with city crews both before and after the event.

Catherwood noted that getting to and from the park on the district May Day is a significant undertaking. More than 900 students walk from five elementary schools to Queen’s Park – from École Herbert Spencer, FW Howay, Richard McBride, Lord Kelvin and École Qyayqayt elementary schools.

To ensure their safety, the school district works with city police who typically control traffic and manage intersections as the students make their journey. 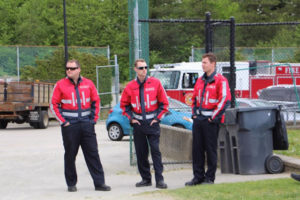 and volunteer chaperones are also required to be in place to escort students and be present for the duration of the event.

A total of 14 buses have been hired this year to transport 704 students and 105 adults to and from the park. They are from Connaught Heights, Queen Elizabeth and École Lord Tweedsmuir schools.

For the event itself, the committee arranges for the support of  St. John’s Ambulance; ensures dignitaries have been invited; prepares scripts for the Royal Suite; and plans for contingencies such as weather. 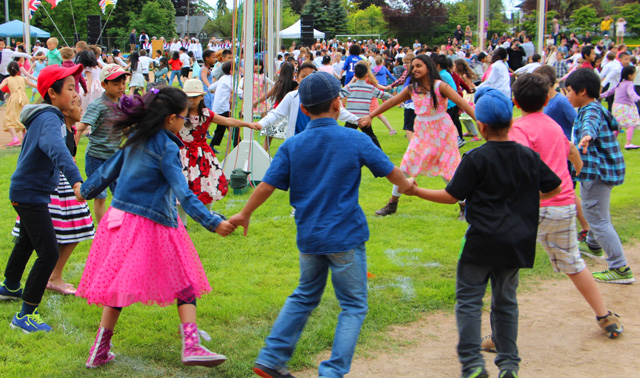