A chance to shine: Syrian school children share their culture 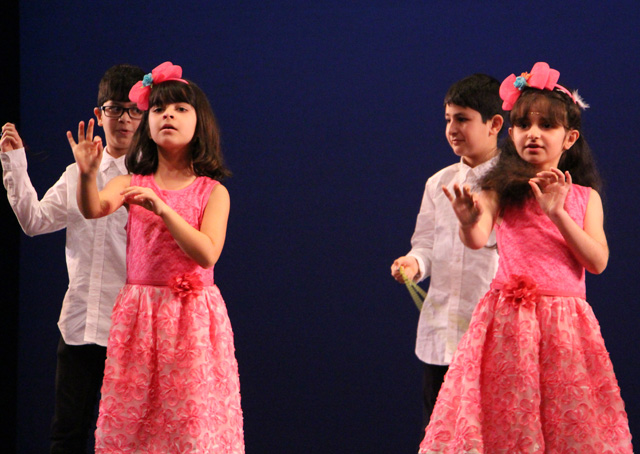 It was a chance to shine and they took it with pride: Syrian children in New Westminster shared their culture at Massey Theatre last month – dancing, singing, acting traditional stories, and enjoying food together with their guests. 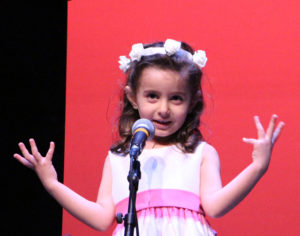 Four-year-old Elena, a refugee from war-torn Aleppo, sang – in three languages – a song whose refrain “Give us a chance” was a haunting reminder of the nearly 5 million Syrians displaced by the ongoing war since 2011.  She was accompanied in her French, English and Arabic performance by New Westminster Schools high school student Sophia Sun on piano.

Syrian siblings Omar,  Ahmed, and Heivi, aged 12, 10 and 7, fled their home of Qamishli in northeastern Syria and spent four years as refugees in Lebanon –  where access to schooling was virtually impossible. They arrived in Canada with their parents 15 months ago. 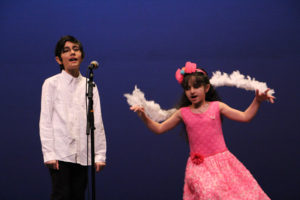 Since that time, they’ve adapted quickly to their new home in New Westminster – immersing themselves in their school classes, adopting pizza as a favorite food, learning English, and playing soccer at Queen’s Park.

But on March 26,  they shared with Canadian friends a glimpse of their own cultural traditions that are the roots of their personal histories. Seven-year-old Heivi introduced the ancient traditional story “The Merchant and the Parrot,” whose moral, she told the audience, is that “birds are like humans….they value their freedom more than food.” 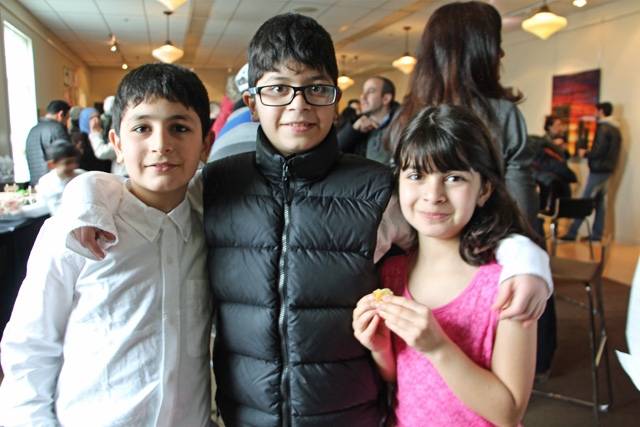 For three months, a program of Syrian arts, crafts, and performance for children and youth was hosted at Massey Theatre in a collaborative project with the theatre, New Westminster Schools, and the immigrant and refugee support organization Mosaic, the host agency for the district’s Settlement Workers in the Schools program. 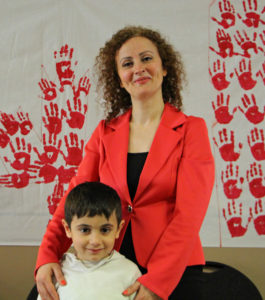 Fadilia Louis is a Syrian parent and refugee in New Westminster. She was thrilled to be invited to be the instructor guiding the children in their artistic explorations. As a teacher in exile in the Middle East, she had worked with Syrian refugee children in Jordan, helping them to express themselves through art and culture as they struggled with displacement and upheaval.

Working with the children in New Westminster helped Louis find her own motivation and confidence, said Mosaic’s Ghada Shawil, co-ordinator of the district’s Settlement Workers in the Schools (SWIS) program.

“Refugee parents and children have a lot of talent, but because of the language barrier, they are shy or hide their potential. This program has been a chance to empower newcomers to Canada to have a voice, to overcome fear and to find self-confidence. It is really making a difference.  We are noticing that the families have been doing so much better,” said Shawil.

New Westminster Schools has long been welcoming refugees into schools from all over the world. The Government of Canada resettled more than 25,000 Syrian refugees across the country between November 4, 2015 and February 29, 2016 and is continuing to do so in 2017, welcoming a total of 40,081 as of Jan. 29 this year. Recently, more than 60 Syrian refugee children arrived in the New Westminster school district, Shawil said. 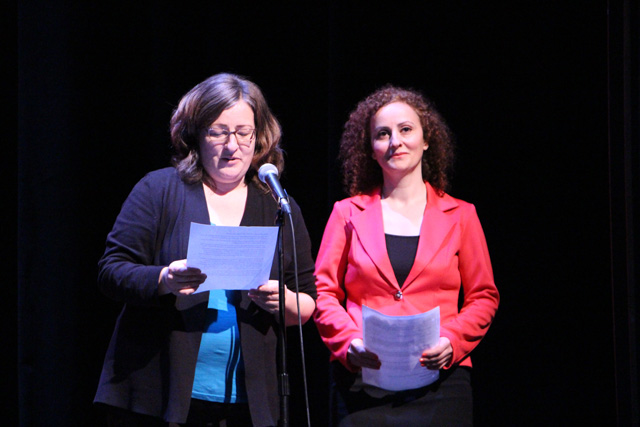 Massey Theatre Society’s executive director Jessica Schneider knew as soon as she heard Canada was set to welcome Syrian refugees early last year that she wanted to respond.  She applied for a multiculturalism grant to create a Syrian Children’s Arts Program. Together with support from SWIS and New Westminster Schools, the joint pilot project was launched in December. 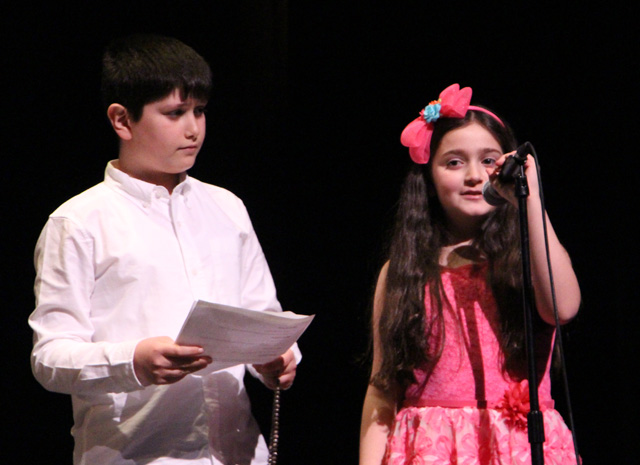 Three months later, the children were on stage. Many, shy as they learn English and the ways of their new home, were confident in speaking Arabic and demonstrating their cultural traditions.

For Schneider the idea was a calling. Her paternal family were Holocaust survivors who came to Canada from Czechoslovakia; her father was a well-known actor who mastered classical English for the stage and – as with many newcomers and their descendants – adopted the dominant culture. But for Schneider, something was lost in the process.

“It is important you have a sense of your own culture while integrating into a new culture,” she said.

“I recognized some of the issues, and  I wanted to help these children be visible rather than invisible.  My son is in grade one in the school district; if he can understand why his schoolmates can’t understand English it can help .  Culture is always the best way to meet people.” 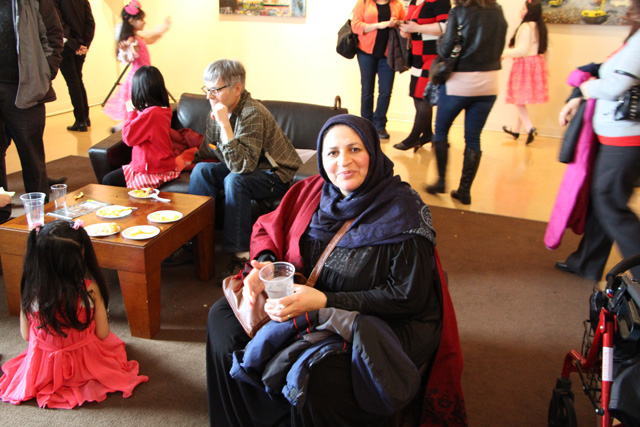 Schneider said the Massey Theatre is embedded in the community and has been a gathering place for new Canadians throughout its 70 year history.  “Being able to celebrate cultures from all over the world is a part of our heritage and legacy as a building and an institution,” she noted.  “We see part of our role as facilitating young people in the arts. I want to see these kids participating throughout their school lives.  We have opened the doors for them and we want them to know: this place is yours too.”

Shawil said the next step for the pilot project is to encourage the children to go to school classrooms and share their arts and culture with their other youth.

“It’s been an exciting process.” 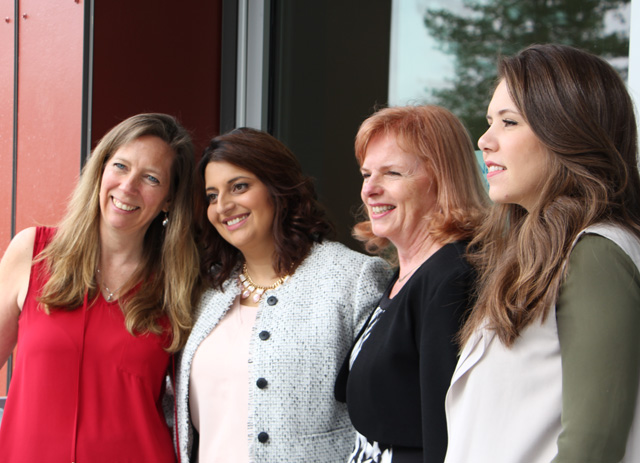 The National Observer in an article by reporter Jenny Uechi published April 13, 2017, draws attention to New Westminster’s comprehensive commitment to its Syrian refugee kids at school.

Thanks in large part to the rich history of the school district’s collaborative relationships with community service providers, the article notes, “school administrators and staff serve as a model for other communities around the world accepting refugee families.”

With the impending arrival in Canada of a first wave of Syrian refugees in late 2015 and early 2016, the district and its partners took pro-active steps to ensure families could access resettlement services from a school setting, focusing  on the community service hub at Lord Kelvin School. .

However, research has shown that trauma can take time to surface, often after newcomers address the basic living and resettlement needs of their families. As the article explains, rather than wait for crises to arise, the district and its partners organized a program to help teachers and front-line workers identify and respond to trauma.

In a New Westminster Schools partnership with Child and Youth Mental Health  (Ministry of Child and Family Development) and Cameray Child and Family Services – and with the support of a $17,200 grant from the United Way of Lower Mainland –  the  trauma response project was formed.

The second phase has focused on a coordinated response to ensure a continuum of services are in place. To learn more about the red flags for trauma, how teachers can help, cultural stigma in mental health counselling, and the importance of timely support for refugee children, please read more here….