Motivated to learn; inspired to teach…. 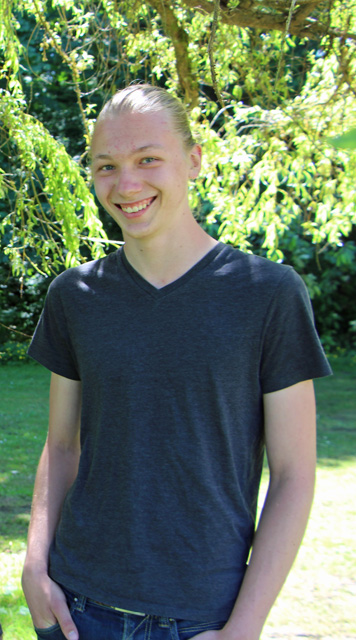 They all go together if you’re a Sigma grad. Throw in a watermelon eating contest, and the celebration is complete!

After spending a bit of time in the afternoon sun competing in egg races and watermelon eating contests, each of the students received certificates for completed courses

The nearly 30 graduates then donned hats and gowns in formal recognition of their achievements – accomplishments often achieved in difficult circumstances.

“Truthfully, this has been a good year for our students,” said youth care worker Sara Weatherby. “And this is one of life’s biggest accomplishments.”

Despite the challenges new grad Josh Kocsar has faced in his living situations, he says he’s never lost his motivation to learn.

Now 18, he’s had six different social workers and has lived on his own for four years – in a shelter, in foster care, ‘couch surfing’ and most recently through a provincial government “Youth Agreement” providing some financial support until age 19.

Kocsar felt his early experience in homeschooling for six years meant he lacked social connections from grade 4 to grade 10. .Although exposed to lifestyles in his teens that might have taken him down some dubious paths, he’s never lost his focus on school. And he’s had a consistently high grade point average.

“I didn’t really ever see any other options to school.  I was always a step ahead: I’m a planning person and I knew that’s the direction I would go.”

Kocsar went to NWSS but counsellors transferred him to the Sigma academic – and it was a good fit. “Sigma is really flexible; you take your time on topics, you can go slow and that’s what I like. ”

As for what he’d like to do now that he’s graduated, – he says he ‘s got too many interests to decide quite yet.  While he likes computer coding , he also likes to draw and do photography.  In fact, he’s already had a month-long showing of his photographs at Cafe Bon Chaz on Main and Broadway, and he’s keen to collaborate on more photography projects.

Counsellor Sara Weatherby applauded each of the students’ graduation, a remarkable success, thanks in no small part to Sigma’s unique programming and dedicated teachers. It’s also thanks to the significant role of the apprenticeship program at NWSS, Weatherby said.

It’s here that many students are truly motivated by hands-on, real-world training to find their paths – in carpentry, chef training, plumbing or automotive work.

“One young woman who missed a lot of school got 100% on her test and is now a motorcycle technician,” Weatherby said. ‘Apprenticeships completely turn many of our students around. It offers a structure, it’s hands-on, and it’s a change.”

While Sigma offers core courses in English, Science, Socials, Biology and more, it also offers numerous electives as well as the opportunity to take courses at NWSS.

Sigma teacher Nina Binpal is a ‘sponsor teacher’ for new graduate Jordan, who took a shine to science and is already enrolled at Douglas College for the fall semester to study kinesiology.  Sponsor teachers meet with students on a regular basis and work with them in realizing their goals.

“It’s flexible and we talk; we develop strategies together and a plan to address student circumstances and goals,” said Binpal. “These are important life skills.”

For Jordan, work as a cashier at Safeway takes up a major chunk of her time.  She has been in at Sigma for two years. As an avid athlete – and a fan of softball and kickboxing – kinesiology is a natural fit for her dreams.  “I like sports and figuring out how the body works.” She’s glad to be on her way.

Grade 12 student Nolan Bellerose shared his story earlier this year on the national CBC radio program The Current, highlighting how football was the turning point that saved him from addictions, gangs,and depression. He served as a 225-pound offensive lineman with the New Westminster Hyacks Senior football team, and is now a graduating student in the Sigma program at NWSS.

Last year, he volunteered  with the Spirit of the Children Society in New Westminster, which empowers and strengthens Aboriginal families. The experience as a mentor to children needing guidance is also helping set him on a new path. He plans to head to college with the goal of becoming a social worker, “so I can try to motivate youth around Canada to play sports they want to do and see that it can change their lives too.”

Teacher Darryl Nakashima came to teaching seven years ago, motivated by his work with youth in east Vancouver.

He saw young people as consistently ‘so amazing and so resilient’ – and yet unable to see their own gifts. “Instead, I saw them coming out of the school system feeling ashamed of their intelligence and defined by underlying learning disabilities.”

For Nakashima, teaching students includes a recognition that learning isn’t only about academics.  It  can involve a time when young people also need a stable environment as they work to stabilize their own identities.

“I understand teachers have a difficult job and there is a limit to what you can do.  But that’s why I love Sigma, the Power Alternative Secondary Program, and RCAP (alternative offered at New Westminster Schools). Here, students get the unique supports they need.”

Said Weatherby: “We have so many students with so many challenges and obstacles. But today: They made it!  It’s amazing!”