A hair’s breadth away…

October 7, 2019 – On Friday, there was no sign of panic from Secretary Paula Bates.

She still had a full head of hair.

But it was also evident by 2:40 p.m. she was within a hair’s breadth of losing it all. By Monday: her fate was sealed.

The challenge: to run laps around the schoolgrounds and raise a whopping $5000 for the Terry Fox Foundation’s mission to fund cancer research.  The annual Terry Fox Run is  considered one of the largest fundraising events in Canadian history. 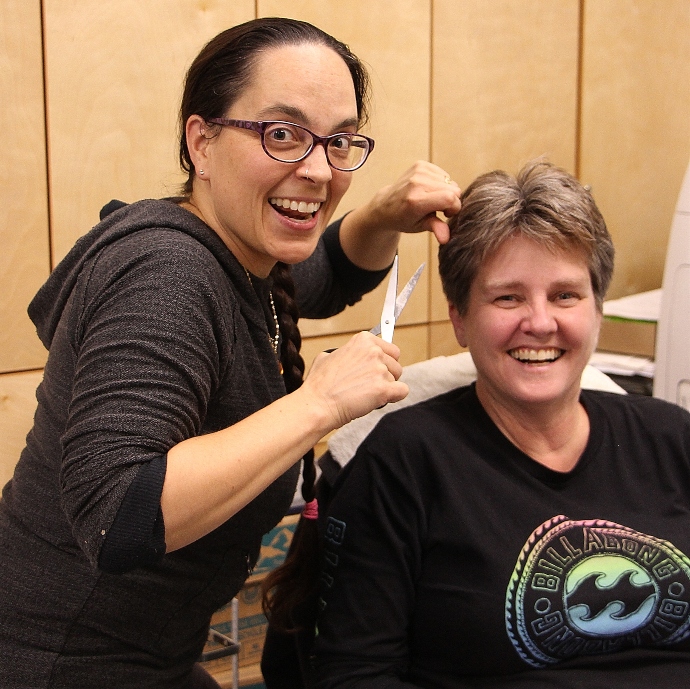 A small sacrifice for a great cause…

If École Lord Tweedsmuir students were able to inspire enough donations to surpass their goal, Secretary Paul Bates was ready to lose a full head of hair to honour their accomplishment.

“The kids are so proud of the money they raise,” Bates said. “And when you think that Terry ran a marathon every single day for 143 days, how can I say I’m not willing to sacrifice my hair for such a great cause?”

That’s when the decision to extend the deadline was made.

On Monday, the news was confirmed: another $575 had been raised online over the weekend. Students were happy to help.

“The money is flowing into my desk this morning. Kids are coming up and saying: ‘this will help make sure you shave your head,'” she laughed.

“We just really have a supportive group of families. Always have,” said Bates – who has seen three generations of her own family attend the school where she now works, including her father, herself and her children.

She also has a personal commitment to the cause.  She lost her own father to cancer, due to exposure to asbestos, two weeks after her mother died. Her parents had been together for 64 years.

For eight years, Bates has offered to have her head shaved to inspire the school’s fundraising goals.

This is the year.

Bates is philosophical about her fate.

As for losing her hair, a date with her hair-cutter will be arranged and will take place in a school assembly soon.