A Question of Survival: NWSS Students Engage in the Darkest Chapter of Modern History 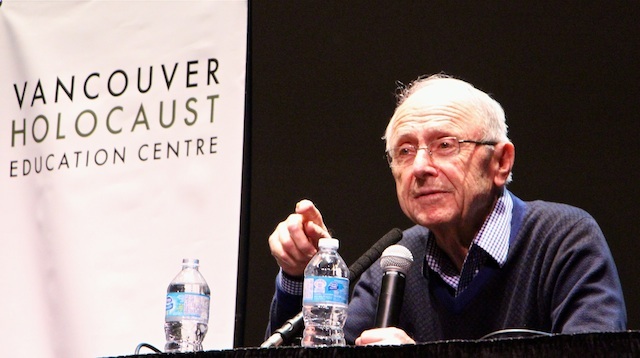 May 11, 2017 –  NWSS Students encountered one of Vancouver’s last remaining survivors of the Nazi concentration camps of World War Two this week during the school’s first-ever Symposium on the Holocaust.

Hundreds of grade 11 and 12 students at the event met David Erhlich, a 17-year-old Jewish teenager from Romania when he was sent to Auschwitz-Birkenau – a ‘factory of human death’ where 12,000 people were murdered daily.

Both of Ehrlich’s parents were killed in the gas chambers the first day he arrived. He emerged nine months later weighing 80 pounds and barely able to walk.

Today, Auschwitz is a post-war symbol of terror, genocide and the Holocaust. It also raises profound questions about racism, social justice, civilization, and human nature.

The Art of Asking Questions…

The encounter with Ehrlich was something that grade 9 – 12 students in teacher Kathleen McDonald’s Conflict Resolution class prepared for a few days earlier.  But what questions might a generation of 21st century Canadian students begin to ask of such a dark chapter in human history? 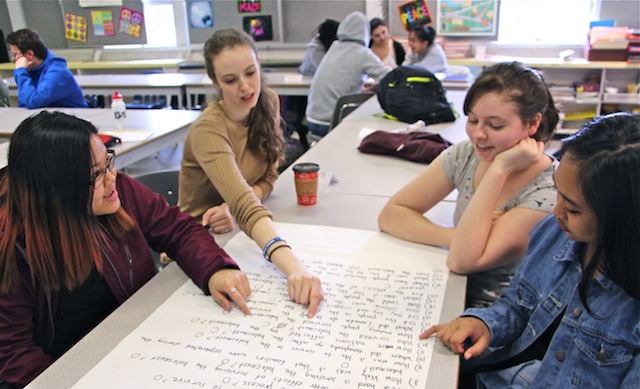 “Asking questions is a thinking process,” guest teacher Leanne Ewen told the students. Ewen is one of three facilitators in the district helping teachers from kindergarten to grade 12 incorporate strategies in adopting BC’s new curriculum in their classes. In fact, the ability to ask meaningful questions is only recently being recognized as a critical skill to develop in its own right, she said.

Ewen noted, for instance, that the classic approach of teachers asking questions and students answering them is being turned on its head. 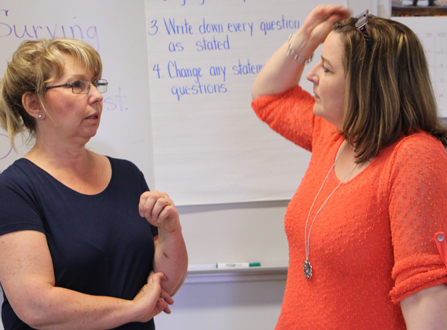 Instead –  with the spotlight on personalized learning and deeper engagement with content –  the focus is switching to what learners want to know and the questions they want to ask.

Students in MacDonald’s class were already used to working in groups as part of their class in resolving conflicts and are well on their way to developing skills in communication, negotiation and empathy.

But Ewen promised to help “walk through a way to come up with some meaningful questions for the Holocaust symposium” using a strategy called the  ‘Question Formulation Technique’ (QFT).

QFT offers a set of rigorous guidelines allowing participants to brainstorm –  opening the way for students to respect each other’s questions without judgment, to build on their peers’ questions, to identify their priorities, and to understand how to get at both content as well as the key ideas of their subject matter. 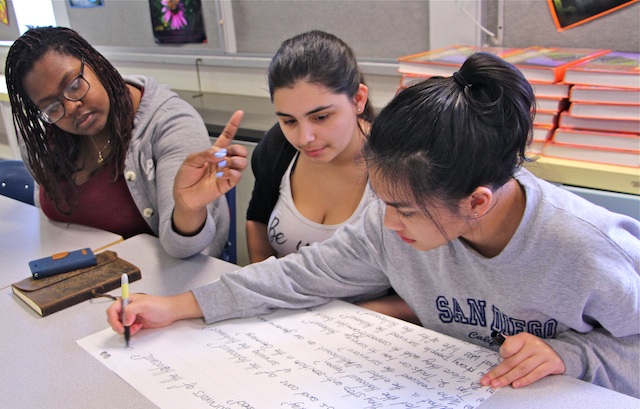 Ewen has seen middle school classes come up with nearly 190 question in 10 minutes using the technique. Generating questions is the first important step. But articulating questions that lead to deeper inquiry can open worlds – for science experiments, analysis, research projects and deeper thinking.

As Ewen explained to students in MacDonald’s class: “You want a question you can’t stop thinking about. Your head hits the pillow and you are still thinking because the question is so compelling.”

The result of the QFT process last week was a self-evident buzz:  “It was exciting to see our questions being at the centre of the class.  The process really connected us,” said Pearl, a grade 12 student interested in studying kinesiology.

During the exercise, students developed closed questions that help identify facts and information : How many people were murdered in the Holocaust? How many death camps were there?

But it was the open-ended questions  – What did Canada and other countries do to help the survivors?  What does it feel like to survive the holocaust?  Why were the Jews targeted?  – that everyone agreed could “bump your inquiry up to the conceptual level,”  as Ewen put it. 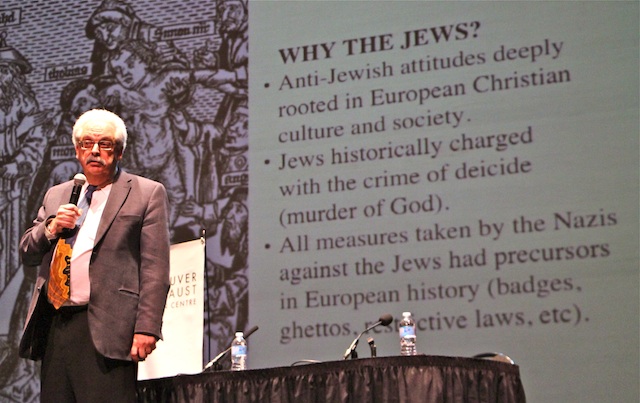 Questions as keys that open doors….

In some cases, a simple question can contain a world of complexity. Several of the student groups during MacDonald’s class had asked the straightforward question: Why the Jews?

Kit Krieger is a social studies teacher, a former president of the B.C. Teachers Federation, and a long-time holocaust educator who presented at the symposium on May 8 along with David Ehrlich.  “Why the Jews” was the question at the top of his slide: a three word question that opens the doors of history, religion, and politics.

As Krieger indicated, the answer lies in an understanding of 2000 years of anti-Semitism in Europe deeply rooted in Christian culture. It also requires an exploration of the political shift  in Nazi times to a belief in a biological racial struggle for survival. The emphasis on  racial identity led to discrimination in law and from there to elimination of whole races of people based on stereotypes and propaganda.

Some of the most educated government leaders in German society at the time – the majority with Ph.D.’s –  were the architects of the genocide when they gathered in 1942 at Wannsee to implement the ‘Final Solution,’ which involved deporting most of the Jews of German-occupied Europe to Poland and murdering them in six death camps. 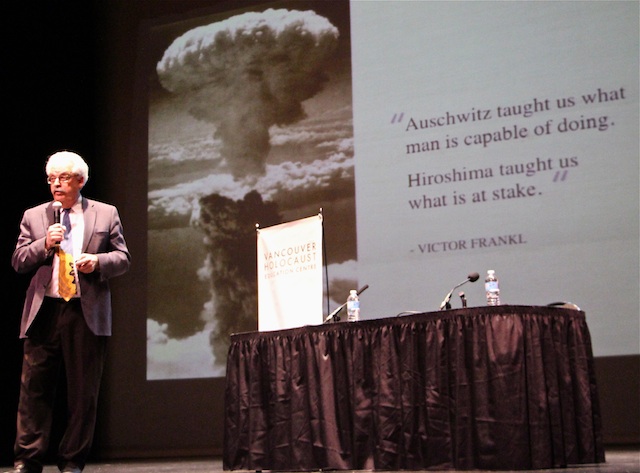 Genocide as a Modern Event…

Sometimes, asking unusual questions and making connections can shed light on a topic.  Krieger noted that the fact that genocide appeared rare in human history before the 20th century raises the question: “How is the holocaust a modern event?”

He said the mass murder of millions of European Jews required modern railroads to transport them across Europe.  It required factories to systematically gas them .  It required a public education and mas media system to teach group thinking. And it required a bureaucracy to systematically process death. As Krieger highlighted for the students, when each person had such a small part in the killing of 12,000 people a day, it meant each could feel they had no personal responsibility in  mass genocide,

“Only a modern society can do this,” Krieger observed.

Survival : The Search for meaning…

One of the key issues several groups in MacDonald’s class wanted to know was the psychology behind survival:  What type of personality can help someone survive such a traumatic experience?

As they learned at the symposium, that  was the question that Viktor Frankl, a survivor of the holocaust, addressed in his leading book Man’s Search for Meaning,  Frankl was an inmate and psychiatrist in Auschwitz who saw the phases of shock, apathy and despair that overcame fellow prisoners. Frankl realized that finding  meaning even in the experience of extreme suffering was a source of hope that could affirm the will to live.

For David Erhrlich, the students’ questions about his own survival were straightforward to answer.  “I was young,” he said simply. “I don’t think it was in my dictionary to give up. Parents who lost their kids: their lives were over.  Kids who knew their parents were gone, or didn’t know: they had a had a higher rate of survival.  That is nature’s way.”

He also noted from the perspective of being in his 90s that he had “more guts than others,” – describing how he would steal potatoes from the German S.S. kitchen, or  pick the green grass underneath the 2,400 volt electric fence to supplement his starvation diet. 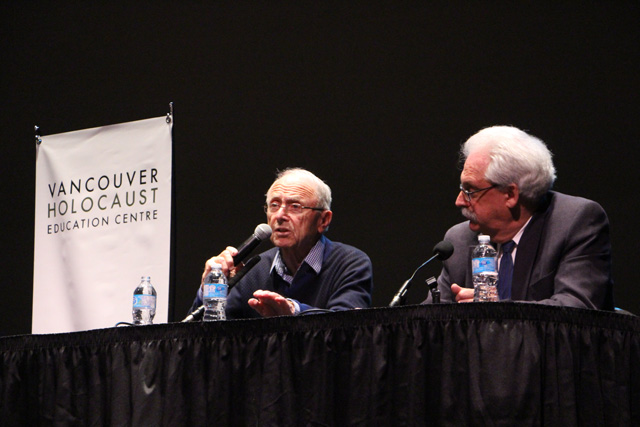 Krieger suggested that survival was based on more than luck or psychology. For Europe’s Jews, survival depended upon others.  He noted that six million Jews were murdered in the Holocaust and that 200,000 million people were bystanders.  An estimated 25,000 people helped save Jews.

“The question is: when everyone else is doing the wrong thing, how is it that some do the right thing?”

While Krieger told students it was not possible to explain the complexity of the holocaust in a two-hour symposium, the hope was to raise questions to provide a framework for thinking about this period of history.

One of the last questions students at the symposium raised was a direct one: “What do you want us to take away from your presentation?” The answer from both Erhrlich and Krieger was a hope that all human beings regardless of race will be respected for who they are and what they do – and that an understanding of history and its patterns of  causes and consequences can help prevent something similar from ever happening again.

The  Holocaust Symposium at NWSS was presented, in partnership with New Westminster Schools, by the Vancouver Holocaust Education Society which envisions a world free of antisemitism, discrimination and genocide, with social justice and human rights for all. 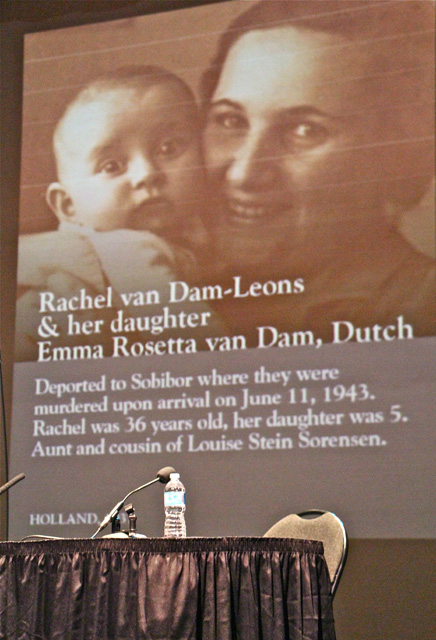