A Singular Sensation for 2017-2018: Trustees make the rounds of district schools 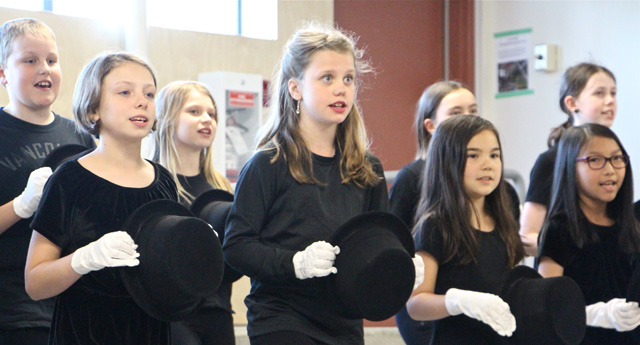 But that’s one of the delights of holding committee meetings once a month in school settings. The Board of Education has been making the rounds of district schools since September – and getting an inside look at education in the process.

Last month, students at F.W. Howay elementary school put on the Ritz to open the board’s May meeting. They created a singular sensation performing a medley of musical hits — from Cats and The Sound of Music to Wicked, a re-imagined Wizard of Oz story 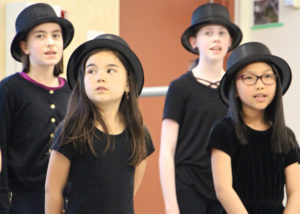 from the Wicked Witch of the West’s perspective.

Music teacher Dr. Jeanne Kentel said the performing arts are a great way to bring the school curriculum alive. For  the students who performed, it’s also an exciting way to share their talents.

“The students and parents at Howay are amazing, and I’m loving this,” said Dr. Kentel. She joined F.W. Howay’s staff at the beginning of the school year and has been offering drama, music and dance practice as an extra-curricular activity.

An adjunct professor at the University of BC’s Department of Curriculum and Pedagogy, she is a firm believer that musical theatre is a great opportunity to integrate music, drama, dance, and story-telling.

The fact that students got to showcase their Broadway skills in a brand new daycare and multipurpose room was also a treat at F.W. Howay. After more than a year of seismic remediation, work was completed this past year, leading to the two new room additions. 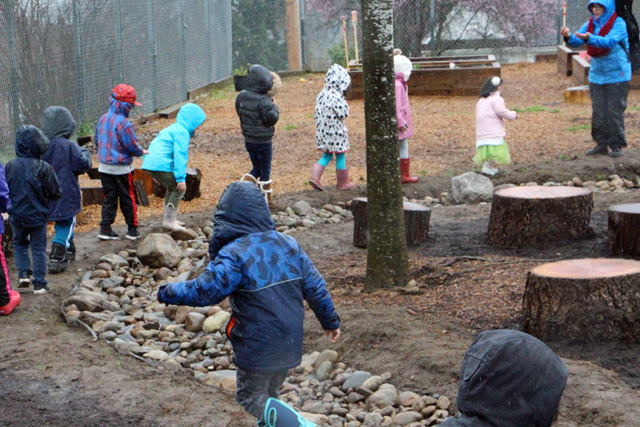 How a garden grows: The Board of Education held its first school-based meeting of the 2018-2018 school year at École Lord Tweedsmuir elementary school in September. Trustees visited  the first stage of a school-wide, multi-phase outdoor garden project that by June included a river bed, pergola and living fence …

From first to last: An amazing transformation in student learning…

The trustees’ last school-based meeting of the year was held June 5 this week at New Westminster Secondary School.

Here, the focus was on a transformation in learning for high school students – in everything from Math to the Digital Arts. 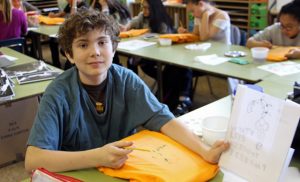 “We are breaking down some of the walls and silos of the school,” NWSS Vice-Principal Laura Roberts said as she welcomed trustees to an overview of the learning journey at the high school.

She applauded the critical role of teachers in the unfolding educational transformation at NWSS – a journey guided by BC’s redesigned curriculum which is due to be fully implemented at the high school level in the 2018-2019 school year.

When students in subjects like Math, Social Studies, Media Arts and the trades are able to ask their own questions, engage in projects driven by their own ideas, learn through real-world experiences, and problem-solve using a growing array of technologies, they are taking ownership of their own learning.

It’s a profound shift from passive to active learning, taking both students and teachers beyond facts, tests and learning by rote, as trustee James Janzen noted.

The rewards also include more flexibility for teachers to address the interests and passions of their students. In fact, whole courses are being offered that increasingly reflect some of those interests – from Genocide Studies and Human Geography, to a History of Mathematics and seven blocks of Digital Media courses.

The teaching challenges include a need for resources, time for planning, and the opportunity for teachers to collaborate in cross-curricular approaches that enrich learning.

There is also risk.

“You learn from failure; from what works and what doesn’t,” said Social Studies teacher Brenda Kwok.

“We have to encourage teachers to be risk-takers. We also have to share our experiences. If I teach the same course twice, I am also changing it to incorporate new approaches based on what I’ve learned. You have to believe in what you are doing. If you are excited and engaged, students will be too,” said Kwok.

In social studies, Kwok said her passion is to help students to be skilled as lifelong learners after they leave school –   to critically assess newspaper and television news, for instance, and to understand why it is important to look at different sources for news.

In Math, a profound shift in five years has taken the department from a focus on tests, worksheets, and standardized courses to teachers experimenting with new technologies and tools (Wolfram Alpha, Khan Academy and Google Docs) and with new approaches that incorporate real world problems.

For many students, situating math in human contexts and trying hands-on opportunities – in carpentry or in foods and nutrition for instance  – can help shift mathematical concepts to practical realities. It’s an opportunity to ‘know, do, and understand.’

Identifying what works for students – and doing more of it…

Both Ha and Watkins noted a less regimented approach to teaching mathematics does not necessarily lead to a negative impact on learning outcomes for students. Both noted that higher level students are capable of pursuing excellence and meeting their post-secondary aspirations.

“Generally, I don’t know that students are much better (in terms of outcomes) but they are much more engaged,” said Ha.

For students in all subjects, the focus is on developing what the BC curriculum describes as the core competences –  in thinking critically to understand what they are learning; communicating to share information, experiences and ideas; and growing in personal and social competency to understand themselves and others.

For librarian Lorena Jones, new approaches like ‘appreciative inquiry‘ hold the potential for positive change in both teaching and learning — by simply changing how students, teachers and staff ask questions.

Positive questions like: “What are we doing to stay relevant in student lives?” and “What can we do to further engage students and help them take ownership of their learning?” help identify what works, why it’s working, and how to go about doing more.

“It’s an amazing time to be part of the little district by the river,” Jones said.