About Us - Traditional Territory 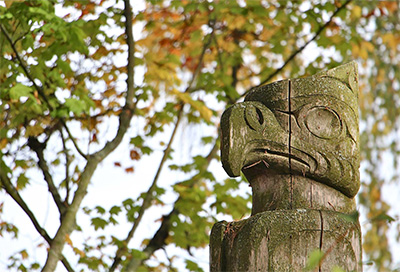 New Westminster Schools recognizes and acknowledges the Qayqayt First Nation, as well as all Coast Salish peoples, on whose traditional and unceded territories we live, we learn, we play and we do our work.

The Board of Education of New Westminster Schools believes that acknowledging Traditional Territory is a way to honour and show respect to the original inhabitants of this land.

This practice enables the wider school and district community to share in Aboriginal cultures, and leads to better relationships and understandings.

Observing this practice connects participants with the traditional territory, and provides a welcoming atmosphere to the land where people are gathering.

About the Qayqayt First Nation

In the 19th century, a village alongside of what is now Front Street in New Westminster was called Qayqayt (pronounced Ka-kite). In 1859, New Westminster City Council sought to remove the First Peoples from the city core, creating three reserves in the surrounding area, including 27 acres of Poplar Island and 105 acres across the Fraser River at Bridgeview.

A smallpox epidemic killed many First Peoples in 1904; in 1916, the McKenna McBride Commission closed the New Westminster Indian Reserve and told the residents to move. Many reserves in British Columbia were being closed at this time, most without compensation or alternative lands to help them move. Qayqayt from New Westminster were married into or adopted into other Nations, relocating to Musqueam, Squamish, and Washington State. The story of the Qayqayt was almost forgotten.

Chief Larrabee’s mother, aunt and uncle were the last few living members of the Qayqayt First Nation, which once numbered 400 people before their lands were sold and their remaining reserve was deemed inactive in 1951. Chief Larrabee’s journey of self-discovery led her to apply for Indian Status in 1994, resurrect the Qayqayt Band, become chief, and work to keep the legacy of her ancestors alive through education. Her story is captured in the award winning National Film Board of Canada documentary “A Tribe of One.”

Sharing her story with the school children of New Westminster continues to have a major impact.

(Adapted from “A History of the New Westminster Indian Band”, 2004).

When kindergarten kids take up hammers and drills to make boxes, benches, and birdhouses, they’re gaining not only practical skills - but problem-solving and design thinking skills too... more

It’s Official! New Westminster Schools is a place where students love to learn…

Charting a course in a time of change: School trustees have renewed the Vision and Mission for New Westminster Schools that will guide and inspire the district into the future... more

Out in the field at École Lord Tweedsmuir elementary school, 350 students are standing in a cool spring rain. The last note of a drumming song has faded - and in the silence, each student places a rock in their new garden riverbed.... more

Our online application is currently unavailable. You may apply using the PDF paper application form.