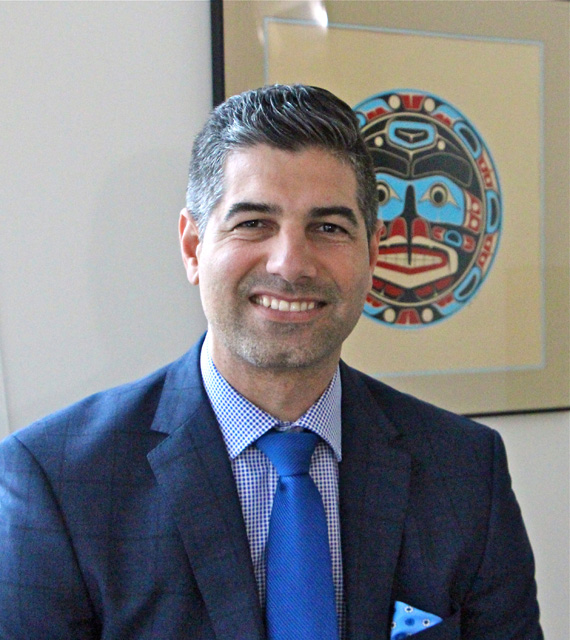 The Board of Education announced today it has unanimously agreed to appoint Karim Hachlaf Superintendent of New Westminster Schools as the outstanding leader in a field of excellent candidates.

Mr. Hachlaf joined the district in August 2017 in the position of associate superintendent, after serving more than 17 years as a teacher, counsellor, District Administrator, Vice-Principal and Principal in the District of North Vancouver.

“We are thrilled to see Karim take our district to the next level at this particularly exciting time in the history of New Westminster Schools,” said Mark Gifford, chair of the Board of Education.  Although the board was impressed by the excellent quality of candidates who stepped forward following a Canada-wide search by PFM Executive Search, Mr. Hachlaf proved himself to be an outstanding contender and the best fit for the district in moving forward.

“We have been impressed by Karim’s commitment to New Westminster, the work ethic that he’s demonstrated, and his vision of educational leadership.  Even in his short time here, he’s shown an impressive ability to build positive relationships with all of our stakeholder groups – from dedicated teachers, staff and principals and vice-principals, to students and families who haven’t always felt heard,” said Gifford.

Mr. Hachlaf assumes the helm during a period of significant momentum in the district, both educationally in implementing British Columbia’s redesigned curriculum,  and at a time when several major capital projects providing new and upgraded schools are underway or have just been announced n New Westminster.

As  associate superintendent,  Hachlaf assumed a leadership role during and after the tenure of former Superintendent Pat Duncan  in facilitating  monumental progress on the state a state-of-the-art replacement for New Westminster Secondary school, set to open in the fall of 2020.  He will also oversee the district as it undertakes a newly announced seismic replacement for the 89-year-old Richard McBride Elementary  School, as well as a major seismic upgrade of École Lord Tweedsmuir Elementary School.

The district’s interim superintendent Bev Rundell, who has 35 years’ experience in a variety of educational  leadership positions –  including a role as coach and mentor to superintendents in BC –  said Hachlaf was clearly an educational leader who can “generate  confidence and vision , facilitate collaboration, and encourage innovation both inside and outside the classroom.”

“Karim is able to skillfully manage the complex and myriad  aspects of the New Westminster School district  as it  continuously  strives for excellence and innovation in education,” she said.