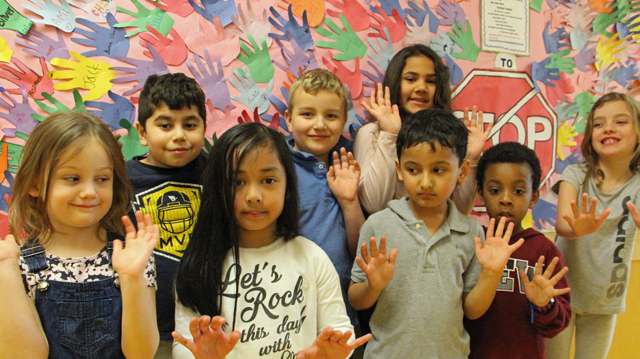 “We can help change things…”

Hands up for kids at École Qayqayt elementary school: where every single one of the 493 students have a hand in the project to help stop bullying.

Resource teacher Shallene Gill wanted to bring the whole school together as a community for Pink Shirt Day on Feb. 23 – a national day to focus on the message that, in the words of Qayqayt students, “bullying is bad, bullying hurts and bullying bothers us.”

A bulletin board in the hallway highlights each child’s part in taking a pledge that when it comes to bullying:”We won’t stand by, we will stand up.”

Students in the school agree that “being mean stinks” and that  “we won’t watch someone get picked on…because we care.”

“It’s a way to support a positive culture across the school,” said Gill. For kids, it’s evident that finding the paper hand on the wall with their name on it is a sign of pride in the pledge they took.

As Principal Karen Catherwood explained, “bullying is a serious issue, and it’s taken seriously.” Bullying often involves a power imbalance between bullies and their victims and  can include physical force or aggression; verbal bullying using words to attack someone; and social bullying aimed at excluding or ignoring someone.

Although the national theme for Pink Shirt Day in 2018 is cyberbullying — using electronic media to threaten, embarrass, intimate or or exclude someone — Catherwood said bullying tends to.take place face-to-face among younger students.

She noted that it’s important to understand the distinction between a disagreement and bullying. “You can stand up for yourself, and you can choose to disagree, but you can do that using respectful and kind words.”

Across the district, schools have planned their own unique events, assemblies, flashmob activities, student presentations, and even an “interactive adaptation of a real court case about bullying.”

Pink Shirt Day is recognized nationally every February. It was inspired by an act of kindness in Nova Scotia when two teenagers supported a younger student who was bullied for wearing a pink T-Shirt, by organizing a high school campaign for all students to wear pink.

In BC, the BC Ministry of Education has created ERASE Bullying (Expect Respect and A Safe Education), a prevention and intervention strategy with the goal of making BC a leader in addressing bullying and harmful behaviours.

At New Westminster Schools, the district is committed to creating and maintaining a respectful, welcoming and nurturing environment. Incidents of bullying, harassment or intimidation and other types of serious misconduct are addressed in ways that restore or strengthen relationships. The district fosters positive school cultures and strives to ensure optimal environments for learning. 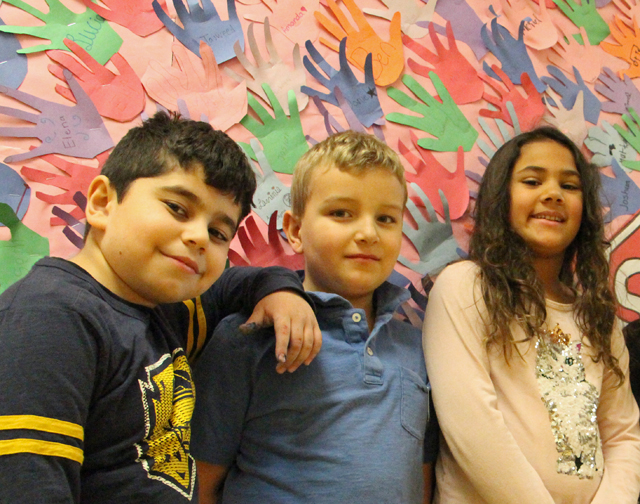 The serious consequences of bullying…

Evidence shows that bullying behaviours – such as those that target specific people, involve ‘mobbing,’ or are acts of cyberbullying –  have serious effects on victims, leading to consequences from social isolation to depression and in extreme cases, even suicide.

Funding also supports programs that work directly with students who have been involved in bullying behaviours and help give them the tools they need to succeed in school. Students learn to understand the consequences of their actions and how they would feel if their peers made up stories about them; they learn healthy social media habits, the impact of peer pressure, taking responsibility for their own actions and understanding behaviours more deeply.