First in BC – School Board Adopts Sanctuary Schools Policy 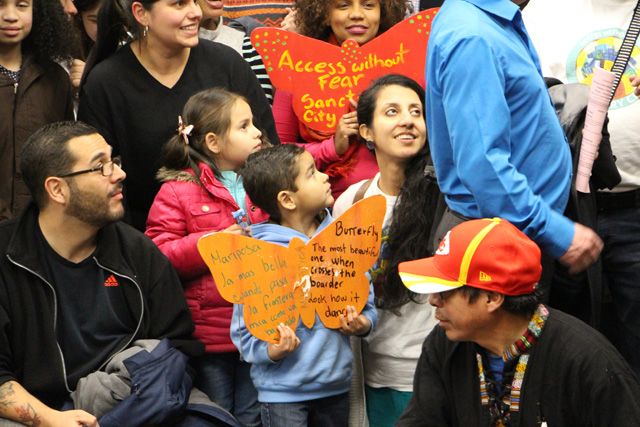 Inspired Leadership: District Schools safe and welcoming for all children, regardless of their immigration status…

March 7, 2017 – A jam-packed school board office burst into cheers, applause, and the sound of marimba music last week as New Westminster Schools became the first school district in BC to adopt a sanctuary schools policy.

Trustees on Feb. 28 voted unanimously in favor of adopting the policy ensuring all children have access to education regardless of their immigration status.  The policy has been a year in the making.

Immigrants and refugees from countries such as Afghanistan, Palestine, Guatemala, Costa Rica and Columbia were on hand to celebrate the decision.

Alejandra Lopez Bravo of the Sanctuary Health Collective said the adoption of the sanctuary schools policy in New Westminster sets a precedent for other districts to follow.

“We feel so inspired by the leadership and collaboration of the New Westminster Board of Education with communities affected by displacement, war, poverty and discrimination” said  López Bravo. “All children are deserving of basic education regardless of their immigration status or the status of their parents.”

Parents, youth and community members from around the world shared with school board trustees their experiences as undocumented entrants or refugee applicants living in B.C.  Newcomers described being  afraid or unable to register their children at different school districts in BC  based on variations in registration requirements. In some cases, migrants feared deportation or separation from their children given their precarious status.

“Approaching a district to register your child is a scary experience when you don’t have documentation,” said Board Vice-chair Mark Gifford.

Gifford noted that one thing almost all districts have tended to do is ask for proof of immigration status. “We do that with no ill intent; it’s just easier to process registration and it expedites the process of filling out provincial forms.”

Although the Ministry of Education determines eligibility for free public education based on residence rather than citizenship or immigration status, each district determines its own enrolment policies under the School Act. Specific rules concerning documentation vary by district.

“This policy shines a light on what we should be doing, and makes it clear we are saying to people with precarious status in New Westminster: You are welcome here,” Gifford explained. 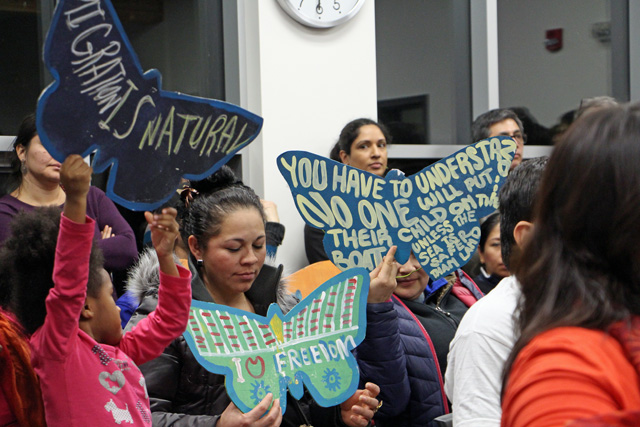 All children deserve basic education, regardless of status…

Trustee Casey Cook said while the adoption of the Sanctuary Schools policy was a positive step to take, he was dismayed that it should be necessary. “This shouldn’t be an issue: we shouldn’t be asking what the immigration status of children is.  We are simply living up the United Nations Convention on the Rights of the Child, to which Canada is a signatory.

“It is astounding we have to go through a process like this, as if the Rights of the Child are even up for consideration.  I’m very, very glad to support this, and to be a small part in providing safety, inclusion and security to all members of our community.” 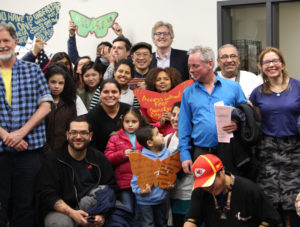 A Celebration at NewWest school board office

The New Westminster Schools policy provides that all school age children ordinarily resident in the district, including those with precarious immigration status or no immigration status in Canada, are entitled to admission in school.  It ensures protection of the personal information of enrolled students or their families.  It also includes specific directives to ensure staff, teachers, volunteers, and stakeholders including immigrant communities are educated about the provisions of the policy to promote expertise, while also ensuring sensitivity regarding the needs of students without immigration status in Canada.

Grant Osborne, president of the New Westminster Teachers Union, told the Board that the teachers of New Westminster “fully endorse and appreciate the efforts of the trustees and thank you for bringing this forward. The B.C. Teachers Federation is lauding your efforts throughout the province.  I’m pleased that you have taken this on and pleased to see the response to your efforts. It’s exciting.” 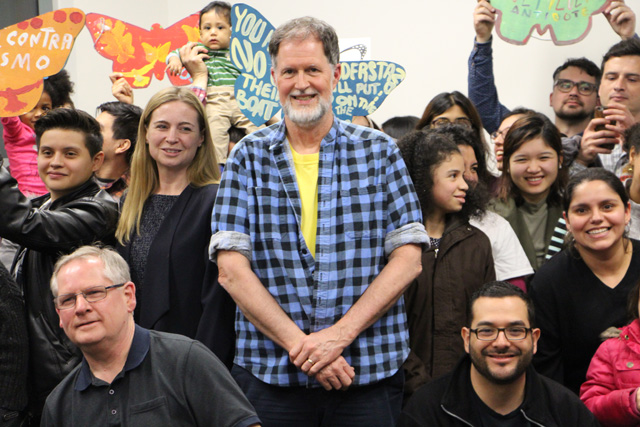 A Year in the Making…

Byron Cruz, of the Sanctuary Health Collective, said the current geopolitical context gives the New Westminster School board’s decision even more significance  – but emphasized that the impetus for the discussions began more than a year ago, when workers on the frontlines in grassroots organizations realized the struggles of newcomers with vulnerable status, some of whom were living like ‘ghosts walking in the streets.”

With minimal or no documentation, some families faced extreme hardships, finding shelter in abandoned homes, and trying to educate their children in isolation.  Cruz  and his organization began to approach BC school boards on a case-by-case basis to address the issue. 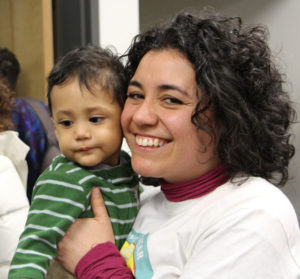 The New Westminster Schools Board of Education struck a Sanctuary Schools committee after hearing its first presentation Feb. 2, 2016, from local families describing their experiences and perceptions of barriers  to registering their children in schools. It was what Gifford called an “eye-opener for the board.”

Kimberley, a New Westminster mother of three from Guatemala, arrived in Canada after fleeing political persecution in her country. “But when we came we found we could not come to the school because we had no status.”  As a pre-school teacher, she said she was anxious about the implications for her children’s development to be deprived of education as they waited for documentation.

Others told the board last week that delays in their schooling in the Lower Mainland led to social isolation and educational hardships.  A Costa Rican adult who missed two years of school as a young school student, said he felt isolated and an ‘outsider ” as he struggled to catch up to his peers. He has since graduated and attended Vancouver Community College to take  telecommunications. Similarly, an Afghanistani refugee who is now 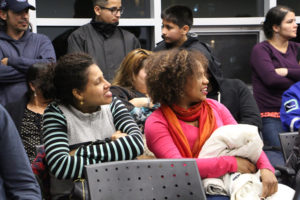 Immigrants and refugees shared their experiences…

studying for a business diploma at Langara College arrived in Canada alone and illegally as a 17-year old youth. He  was placed in foster care, spoke no English, lived outside of the city, and had no access to school because of his lack of documentation. After almost five months of isolation, he faced depression and anxiety. School turned his life around.

“Kids are our future, and (ensuring access to education) is a win-win not just for the parents and kids but for the nation,” said the Costa Rican, now a Canadian citizen.

The Sanctuary Schools committee, co-chaired by Trustees Gifford and Cook, included teachers, NWTU and CUPE representatives, community members, district staff, parents, and grassroots organizations.   It presented a draft policy for consultation and input on February 16, 2017 and the policy was adopted  by the board 12 days later. 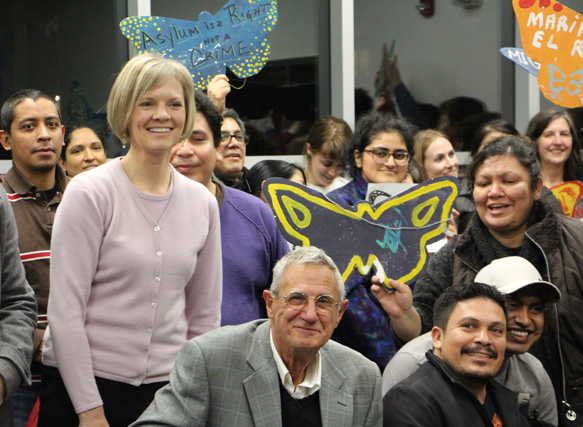 Trustee Jonina Campbell applauded Gifford and Cook for championing the policy, and said that ‘ensuring access to education regardless of status ensures the learning potential of all children is realized, enriching  the city, the province and the country though a more equitable, just,  caring and inclusive society.  There’s a ripple effect beyond schools.” She told   I hope you will continue your advocacy.”

Sanctuary health advocates say the province needs to clarify and standardize its registration rules – until then, advocacy continues at various school boards on a case by case basis.

Board chair Kelly Slade-Kerr said  the adoption of the Sanctuary Schools policy brings awareness and clears up misconceptions about  precarious immigration status.  “I hope that New Westminster is the first of other districts to adopt a similar policy. That is where we want to go.  ” 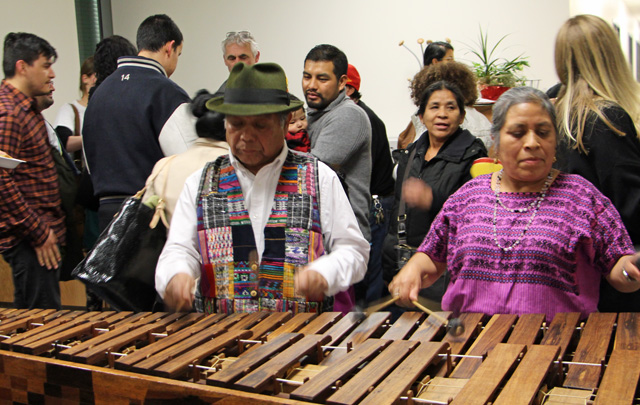 New Westminster Schools in the news: