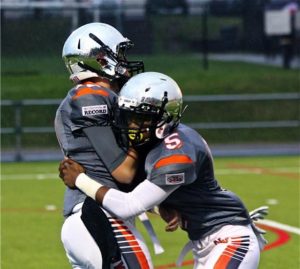 Grade 12 student Nolan Bellerose shared his story on the national CBC radio program The Current this week, highlighting how football was the turning point that saved him from addictions, gangs, and depression.

Today, Nolan is a 225-pound offensive lineman with the New Westminster Hyacks Senior football team, and a student in the Sigma program at NWSS.

But growing up, he was headed down a dangerous road after his mother Alissa died when he was three and his father walked out shortly after, never to return.

“My childhood was really kind of rough and shaky because I was growing up with alcohol and drugs a lot with a couple of my uncles,” Bellerose said on CBC’s The Current. He suffered from depression, anger and pain until he got the chance three years ago to play football.

Hyacks head coach Farhan Lalji recognized in Bellerose that “here was a kid who had lost everyone that was close to him.”  As highlighted in The Province newspaper, Bellerose found in football the discipline and tangible life skills that helped turn his life around. He’s seen similar changes in the lives of other players on the team, too.

“If I was still going down that path without football I wouldn’t be here right now. I would probably either be dead or in jail right now. I believe that 100 per cent.”

Bellerose is graduating high school in 2017. Last year, he volunteered  with  the Spirit of the Children Society in New Westminster, which empowers and strengthens Aboriginal families. The experience as a mentor to children needing guidance is also helping set him on a new path. He plans to head to college with the goal of becoming a social worker, “so I can try to motivate youth around Canada to play sports they want to do and see that it can change their lives too.”