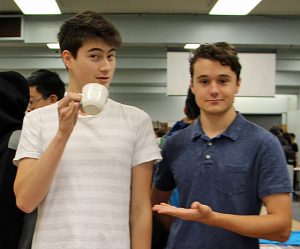 October 5, 2017 – How about a cup of tea if you’re a grade 12 student stressing about tests, homework, extracurricular stuff and getting through another day? For grade 12 students Sean McCarthy and Jonah Wright, jasmine tea does the trick. The NWSS Tea Club gives students a chance once a week to de-stress and take care of their mental health.

For Grade 12 students Labiba, Brianne, Pollen and Himani, tending to the two gardens at NWSS produces not only a bucket of ripe tomatoes in time for Clubs Day this week, but is also a chance to give back to the community. Their Garden Club grows herbs, lettuces,peas and tomatoes for local shelters and food banks. “We’ve just grown attached to the gardens,” said Himani.

Check out the full list of NWSS Clubs here! 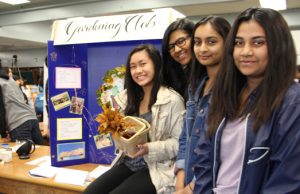 And then there is the Salsa Caliente Dance Club. Along with teacher Peter Ha, the students were adding a bit of spice to the courtyard this week performing what might have been the Merengue, Bachata, and Rueda – and if you don’t know what that is, this club could be for you!

Clubs day at NWSS this week saw more than 4 dozen groups setting up booths and signing up members.

While some clubs are clearly for fun (the Supernerds of NWSS spend their time watching sci fi and superhero movies ), other clubs give students a chance to enter

festivals and contests or engage in human rights and environmental activities. The Film Club goal is to enter short films into the University of BC Student Film Festival, for instance, and the Improv Club hopes to send a team to the Canadian Improv Games Competition.

For NWSS students, clubs offer a chance to feel a sense of belonging in what is one of the largest high schools in the province. They are supported by more than two dozen teachers. The event was organized by NWSS Student Leadership – which is also (you guessed it) a club!