No question: It’s cool to walk to school!

At Queen Elizabeth elementary school recently, the whole community got in on the act – proving that it can not only be cool to walk to school. It can be fun too.

And it might be an example for other schools in the district, noted Principal Paul Manville as he managed the vastly reduced traffic in front of the school.

For one day, everyone pulled together to change the way they get to school. 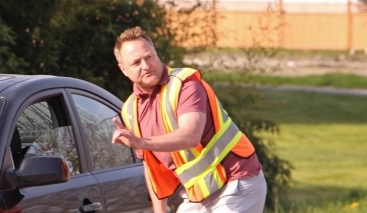 Some walked. Others rolled. Whole families got on their bicycles.  Some arrived, hopping or skipping, with their parents or grandparents.  Moms, Dads and caregivers pushed babies in buggies or pulled toddlers along in wheelbarrows.

Some students just walked through the Queensborough neighbourhood with their friends.

The goal was for everyone to try an alternative way to get to school, not only as a community effort in alleviating the chronic traffic congestion around the school for a day – but as a way to inspire a change in behaviour.

“We’re trying to encourage the idea that there are other options to getting to school,” said Manville.

Getting passports signed for the event was a fun incentive for students, with  checkpoints at five stations in the school vicinity for students to get a stamp confirming they’d walked (or rolled) to school.

Some were so enthusiastic, they visited all five checkpoints. 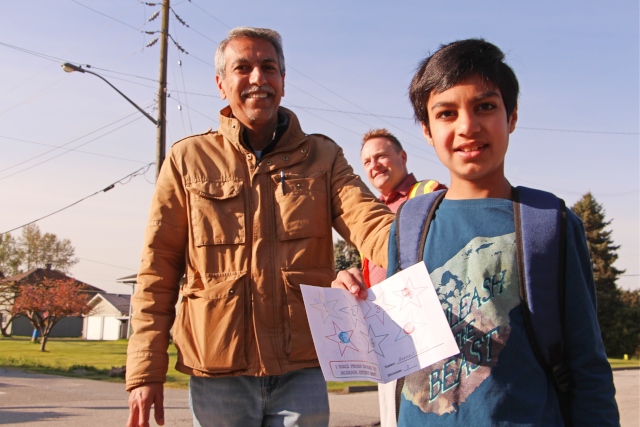 While the weather conditions for the day were perfect, awareness that traffic is a critical issue on a daily basis has been heightened, and most know it will take a community effort to change behaviour, not only at Queen Elizabeth but across the district.

“This is a good experience to remind everybody that there are options,” said parent Dr. Hyder Khoja, who applauded the day’s event. “And if it rains, you can always bring your umbrella,” he added.

Several parents noted that the congestion can be dangerous for students and agreed the idea of changing behaviour is important. Some noted that over time, there have been altercations between parents, debates about parking, cars blocking the wheelchair ramp, and accidents waiting to happen.

Laura Ranalletta is a PAC parent who arrived on her unique bicycle contraption designed to facilitate transportation of one of her children.

“We’ve been working on this (walk-to-school initiative) for a long time. We’re not going to get 100 per cent buy-in but we want to encourage in a kind way that we can consider alternatives…

“We want to take care of our community and each other,” said Ranalletta. 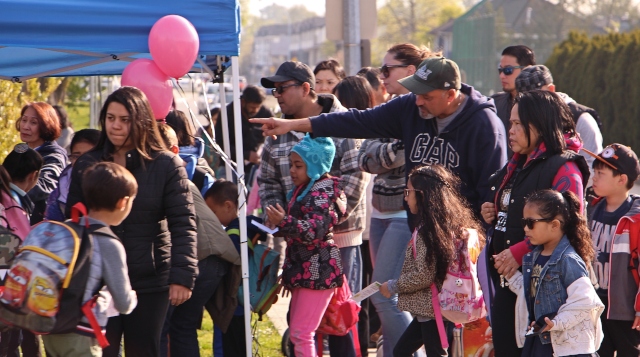 Drive-to-five is one idea that’s beginning to catch on in British Columbia and is promoted by HASTe (Hub for Active School Travel). That’s a park-and-walk program that encourages families and caregivers to regularly pick up and drop off their students at sites within a five-minute walk from school along safe walking routes.  Parents of younger children can walk to school with their children; older children can walk with their peers.

The advantage of alternatives to driving are a safer school zone for everyone – and some built-in exercise in daily trips to and from school.

Queen Elizabeth elementary’s traffic issue led to the school district’s short term investment in 11 parking spaces in early 2019, rented from nearby Roma Hall for $600 a month.

Longer term solutions may involve investment in additional parking options, although Queensborough-based schools’ principals continue to work with their Parent Advisory Councils, along with parents, to research traffic patterns and alternatives.

As Manville noted of the day’s event: “Not one car parked here this morning.”  For everyone involved, that was a great morning.

For Mike Savage, a kindergarten parent who also works with the Ministry of Transportation, traffic is his business.

“Half of this issue is about enforcement,” he said.

“The other half is education.” 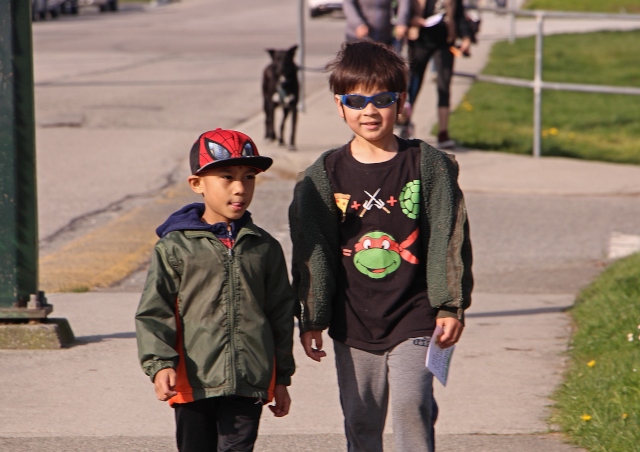