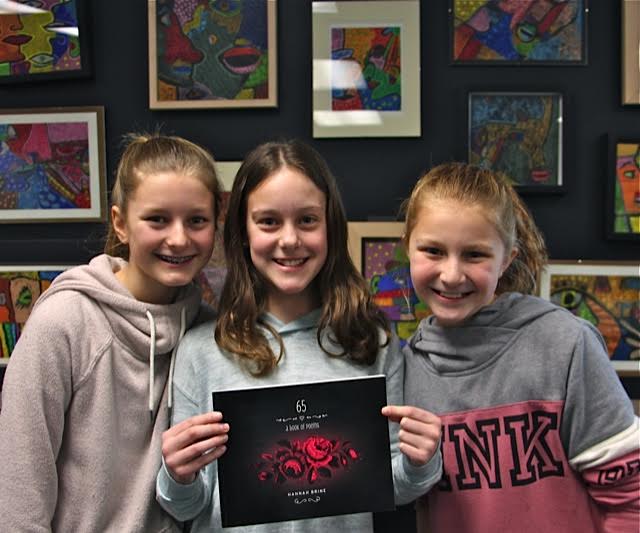 A poet with a cause…

Hannah Brine has published an 80-page book of poetry at the age of 11 and it is filled with roses – 65 of them to be exact.

“I wanted to do this in memory of my cousin,”  Hannah explained recently at École Glenbrook Middle School’s library. The author was accompanied by two of her grade 6 artistic illustrators, Aimee and Summer, each of whom contributed a drawing for one of Hannah’s 65 poems.

AUTHOR: Hannah Brine, 12
PUBLISHED: November, 2016
GOAL: To raise money for Cystic Fibrosis Canada in honour of Hannah's cousin, Eva Dien Brine Markvoort, who died of the disease in 2010 at the age of 26.

BY DONATION: The book is available for a donation of $20. Please contact: 65poems@gmail.com

In each illustration is a rose – tucked somewhere at the end of a branch, in the sail of a ship, or in a girl’s hair.

Together, the poems share the young author’s insights about growing up, family, snow days and school races, the ‘plunk-plunk-drop’ of ripples, and the world around her.

As is fitting for a published poet, Hannah’s book, “65: A Book of Poems,” will  be featured in the library display case at École Glenbrook MIddle School.

But it’s also part of a year-long project to raise money for the disease that took Hannah’s vibrant cousin Eva Dien Brine Markvoort at age 26.  Eva was an aspiring New Westminster artist and writer who lived with Cystic Fibrosis, a disease for which there is no known cure yet is the most common fatal genetic disease affecting Canadian children and young adults. One in every 3,600 children born in Canada has CF.

In her short life, Eva gained international support while raising awareness about organ transplants in BC and globally.

But for Hannah, Eva was the dynamic babysitter who brought life and fun to her early childhood through face painting, drawing – and writing.  In fact, Hannah’s book includes some of her cousin’s poems, which in many ways inspired Hannah’s own calling.

Even better than a million poems… 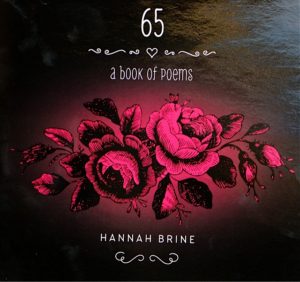 Writing has been Hannah’s passion since she was seven.  “I found that things would just come to me. Sometimes I have the bad habit of waking up in the middle of the night and writing the whole thing down — it just works.”

“One day, instead of a million loose-leaf poems lying around somewhere, my Dad suggested why not write a book? ” she said. And that’s when Hannah, at age 9, thought of creating a book in honour of her cousin.

As for the significance of the 65 roses — it’s a phrase that sounds like “Cystic Fibrosis” and is for many young children much easier to say.

Hannah undertook her project in a collaborative spirit, receiving help from friends and family in designing, illustrating, laying out and publishing the book.

“She put the whole vision together and had a specific idea of what she wanted the book to look like,’ said her Mom,  Stacy Brine. “She wanted a floating image on the front and drawings evoking the art of Shel Silverstein’s black and white sketches. Young people can do amazing things with a lot of support. It took a year to get it all to happen.” 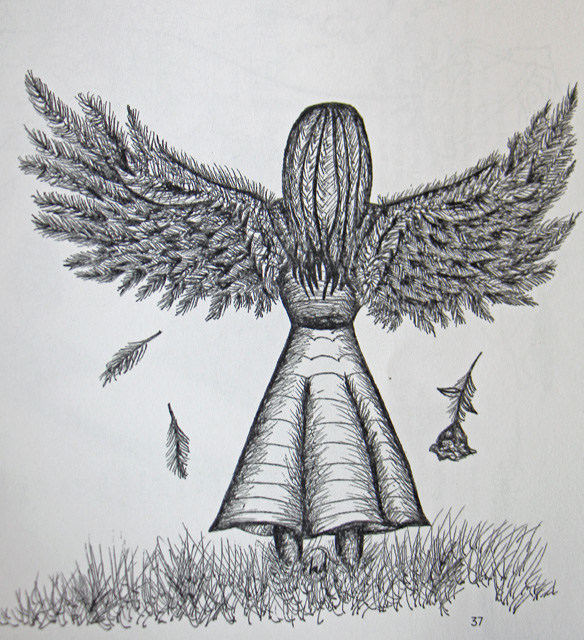 Hannah’s goal since publishing the book in November 2016 is to raise $2,000 to donate to Cystic Fibrosis Canada, a national charitable not-for profit corporation committed to finding a cure for the disease.

That’s a fundraising goal she’s very nearly reached – and she’s only partway through her year-long commitment.

Hannah, now 12,  will continue to sell her book over the coming year.

In February, she was on hand at Douglas College with her books during the “Evening of Stars Hyack Festival Ambassador Gala 2017.” Hannah had a table at Glenbrook school’s Entrepreneurial Fair on Feb. 23.  She’ll have her books on hand at the annual Walk to Make Cystic Fibrosis History on  May 28 in Vancouver. And she’ll wind up the year-long project at the Cystic Fibrosis gala in November 2017.

“We’ve mostly sold the books by donation through word of mouth through friends and family,” Stacy Brine explained. “We’ve now paid for the cost of publishing the books and the first 200 are gone.

“For Hannah, it’s been a wonderful experience; she enjoys talking to people about her book and her cause. A great confidence builder for sure!” said Stacy.

A Celebration of Life…. 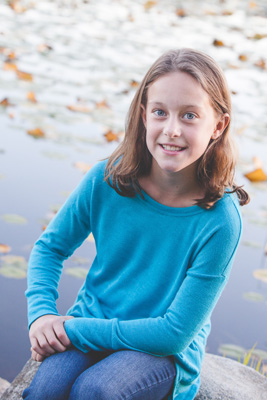 One of the remarkable aspects of the book is its optimism and its celebration of life.  Eva in her short life, was ‘incredibly grateful for the time she had”  Stacy said, and Hannah’s book reflects both that optimism and honesty.

“Eva was a pretty special girl who grew up in New Westminster and went to NWSS,” said Stacey.  The City of New Westminster worked with the Brine/Markvoort family to instal a commemorative plaque last summer in the Queen’s Park rose garden to honour Markvoort’s ‘tremendous courage, determination and hope.”  At that event,  Hannah spoke in the presence of Mayor Jonathan Cote and other dignitaries.

As a teacher, Stacy sees Hannah’s achievement as a perfect example of the new curriculum in BC schools emphasizing the development in students of core competencies such as personal responsibility, communication, and social responsibility.

“Eva was a bright light and loads of fun and Hannah is trying to do something good in her memory.  It’s very empowering and very satisfying.”

To obtain a copy of Hannah’s book: