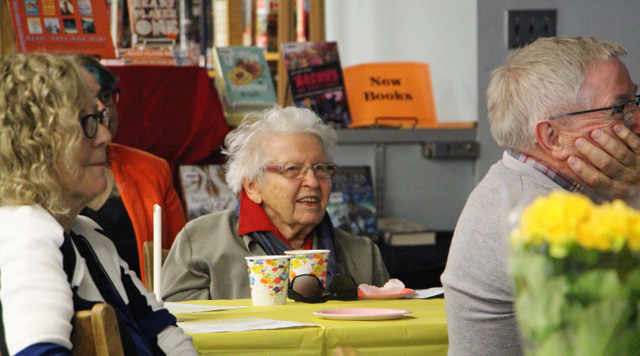 104-year-old Margaret Brunette of New Westminster spoke about her experience of one of the earliest teacher’s strikes in BC.

“Uncivilized” to stand up for fair pay: The year 84 remarkable teachers took a stand

It’s the 100th anniversary of the BC Teachers’ Federation this year – and New Westminster teachers are celebrating the significant role they played in the province’s history of working people.

Together with the New Westminster Teachers Union, the B.C. Labour Heritage Centre  unveiled a bronze plaque at New Westminster Secondary School (NWSS) last week, the fifth in a series that commemorates milestones in the achievement of full collective bargaining rights for B.C. teachers.

104-year-old New Westminster resident  Margaret Brunette helped bring to life vivid memories of what it was like for her family to be on the groundbreaking teacher’s strike in 1921.

Brunette, a former librarian and guest speaker at the NWSS event, didn’t mince words about the ‘ill-informed and sometimes ugly attitudes’ of the day when it came to achieving workers’ rights.

Brunette explained that this was a time when women were not only expected to wear hats and gloves to work  – but when people were also instructed not to talk about their salaries.

In fact, low pay for teachers in New Westminster became the source of conflict for her father and fellow teachers in 1921. As writer Jan Nicol explained, in 1921 there was no legal framework for teachers to negotiate their pay. Instead, salaries were arbitrarily set on an individual basis by the local school board  – with no reference to education or experience.

When the board refused to meet and negotiate an incremental pay grid, teachers took action. Only two years earlier, Victoria teachers in 1919 had launched the first teacher strike in Canada, also in protest of low wages.

A five-day strike and a major step for working rights for BC teachers..

Only two teachers showed up for work. Doors were locked. Students from one of the city’s two  high schools paraded downtown on a ‘sympathy strike.” And tensions rose.

The board sent each teacher a letter with an ultimatum: failure to report for work by Thursday would mean the recipient had resigned and the position was vacant. In fact, the New Westminster teachers had enough resources and support from teacher locals across BC and Canada – and could stay off the job for six months.

By Friday, mounting public pressure led to negotiations, an agreement to binding arbitration of a settlement, the recognition of the New Westminster Teachers’ Association as a legitimate bargaining agent for teachers in the district  – and a return to work.  No punishment was meted out and the teachers met the board’s request to add 15 minutes to each school day to make up for lost time.

As writer Jan Nicol summed it, the “illegal” walk-out by 84 remarkable teachers marked an important step in BC’s labour history toward full bargaining rights for BC teachers.

Moreover, the fact that issues continued to drag on after the strike and throughout 1921 led to to the election of more sympathetic board in the elections of January 1922.

Brunette noted that a result of her father’s involvement in one of the earliest teacher strikes in the province, when she was seven years old, was a backlash of anger from neighbours.

“We were welcomed to New Westminster, but when neighbours heard Dad was a striker and part of the organization, we were rejected. This was not anything a civilized woman or man would participate in. The positions were ignorant, arrogant and at times ugly.”

Brunette’s father went on to become a professor at the University of British Columbia; she herself became head of acquisitions at the Vancouver Public Library. Brunette explained that working people like teachers and librarians required strong organizations at a time “when you had to be fighters.”

But she said that neighbours after 1921 made it difficult for the family to feel comfortable staying in New Westminster, and those memories  – as well as the strength and learning that came with the work of unions – have stayed with her for a lifetime. 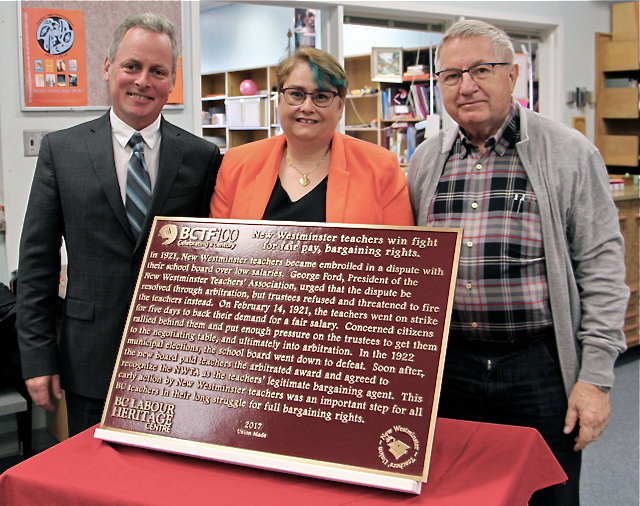 Grant Osborne, President, and Sarah Wethered, treasurer, of the New Westminster Teachers’ Union along with Ken Novakowski, a former BCTF president, unveiled the plaque last week, the culmination of a project three years in the making.

Celebrating the role of working people in the history of BC

The unveiling of the plaque at NWSS to commemorate the 1921 New Westminster teachers’ strike is part of a project aiming to celebrate the role of working people in the province. The New Westminster plaque project was three years in the making.

“We learn about the role of explorers, the early settlers, and politicians.  But not working people, who actually built the province.  We want to ensure the roles of working people are recognized,” said Ken Novakowski, chair of the BC Labour Heritage Centre, and a former president and executive director of the BC Teachers’ Federation.

That’s happening through the Centre’s Remembering Working People: Plaques Around the Province project which has now catalogued over 170 plaques, memorials, and other locations in British Columbia that hold significance to working people and their history.  These can be explored on the Centre’s  “Putting Working People on the Map” feature.

The 1921 New Westminster teachers’  strike was also officially recognized in the BC legislature on Oct. 30 when MLA from Burnaby North,Janet Routledge, made a statement congratulating the B.C. Labour Heritage Centre, the New Westminster Teachers Union and the B.C. Retired Teachers Association for the celebration.

The event at NWSS was hosted by the New Westminster Teachers’ Union with NWTU President Grant Osborne welcoming a roster of special guests including representatives from the New Westminster Retired Teachers’ Association, the City of New Westminster’s Museum and Archives, the BC Labour Heritage Centre, along with teachers.  NWTU treasurer and teacher-librarian Sarah Wethered served as host.

The plaque received funding support from WorkSafe BC, the Boag Foundation, and the BC Retired Teachers’ Association. It will be installed on Sixth Street between Royal Avenue and Queens Avenue, at the site of the School Board Office in 1921.

The BC Teachers’ Federation was founded in 1917 with objectives that continue to guide the Federation a century later, including fostering and promoting the cause of education and advocating for the needs of students within a high-quality public education system. Teachers finally achieved full bargaining rights in 1987.