They were young, as we are young

They served, giving freely of themselves

To them, we pledge, amid the winds of time,

To carry their torch and never forget.

We will remember them.

Students place poppies on the headstones of fallen soldiers…

November 5, 2018 – One hundred and one students from four classes at Richard McBride elementary school answered the call this week to carry a torch and remember. 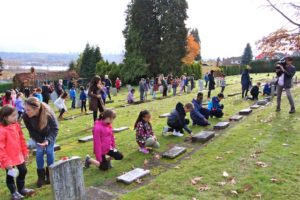 The students visited Fraser Cemetery November 5,  where they each placed a poppy on the headstone of a Canadian veteran, the majority of whom died fighting in one of the  20th century’s two World Wars.

The No Stone Left Alone ceremony is part of a new tradition growing in Canada, inviting school students to visit cemeteries every November and place a poppy on the headstone of a veteran in remembrance.

The Richard McBride students’ visit was recorded by Global TV News and will be featured, as one of five schools across the country participating in the event, on a national broadcast for Remembrance Day this November 11. (See: Global News).

At New Westminster Fraser Cemetery, which dates back to 1869, an estimated 450 veterans’ headstones mark the resting places of those who sacrificed their lives in war or in peacekeeping missions. 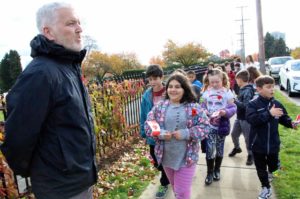 “The simple act of placing a poppy on a headstone has a profound impact,” honorary Col. Karen Baker-MacGrotty of the Royal Westminster regiment told the elementary students.  She then invited each to find a headstone and take a moment to think of the sacrifice of the soldier whose name they read on the headstone.

Richard McBride School Principal Kathleen Chad said each of the students would return to their classroom afterward to spend some time reflecting on their visit.

Veterans along with military and community representatives attended the event.