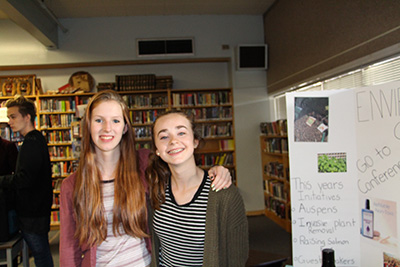 October 2016 – Student leaders at New Westminster Secondary School this year launched the largest number of clubs at the high school yet – a record-breaking 51 clubs that run the gamut from peace and justice, to math and STEM clubs, to jewelry making and Lego building.

For grade 12 student Olga Radivojevic, joining a club was one way to feel a sense of belonging in what is one of the largest high schools in the province.

“I definitely like how when you are part of a club you meet new people and work with others in a positive environment. You feel you are contributing.”

Students wanting to sell beads to raise money for impoverished women in Uganda joined Bead for Life. Those keen to compete in both theoretical and experimental science events across Greater Vancouver could sign up for NWSS Science Challengers. Others interested in creating award-winning, student-produced films also have a place at NWSS to hone their craft. And then there are the hackeysack and badminton clubs, the cultural club and the debate team, Amnesty International and the 3D print club…. 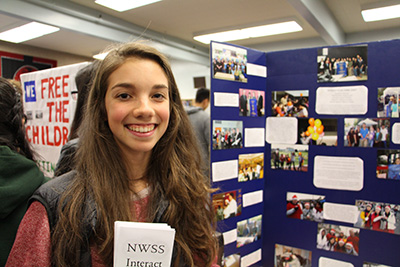 A Sense of Community
Teacher Christine McNulty notes that clubs play a major role in creating a sense of community and belonging in the school. She credits the NWSS Leadership Club for ensuring a huge turnout for Clubs Day in October, when hundreds of students gathered in the library and spilled into the outdoor courtyard recently to sign up for clubs that interested them.

McNulty said the leadership class conducted surveys early to determine participation, leading to a record enrolment. “They are the fabric that holds the school together,” she said. “And our teachers are fabulous. More than 30 staff members are sponsoring clubs; some are sponsoring more than one. They provide space as well as guidance and advice, and they attend events when they happen, so it’s a time commitment.”

Olga joined the service-oriented NWSS Interact Club in grade 10 and stayed with it because she enjoyed the energy and atmosphere. “Each year we fundraise for a different local and international charity. This year, the club is raising money for A Loving Spoonful providing free and healthy meals to people living with HIV/AIDS in Greater Vancouver.” The club’s international charity is Rotary PolioPlus, which has helped immunize more than 2.5 billion children against polio in 122 countries – for as little as 60 cents a child.

“We meet once a week and usually hold donut sales and bake sales, but we will also plan a bigger project,” Olga explained.

Grade 11 student Jamie Butts is with the Environment Club where one of the highlights is the plan to raise salmonids in the classroom. Working with Fisheries and Oceans Canada, and guided by education coordinator Bev Bowler, the students will incubate salmonids in the school classroom, using an aquarium to represent a stream environment.

Jamie says the students expect to release the salmon in the spring in the Brunette River in New Westminster. It’s a step in recognizing how all humans are linked to complex freshwater and marine ecosystems. “What inspired me to join was learning about climate change. I was concerned about that, and when I joined the club, I really liked what it was doing,” she said.

Environment club members are also inspiring elementary students at Lord Kelvin Elementary school.
“We wanted to work with younger elementary school age kids to introduce them to the concept of sustainability and where their food comes from. We went to their school and planted seedlings with them, and they came to the high school where we talked about where our water comes from, about waste and recycling, and about nutrition. On our final wrap-up day, we went back to Kelvin and made a healthy lunch, ate with the kids and painted plant pots together.” The exchanges were so successful, the club plans to do it again this year, Jaime explained.

And if saving bees, raising money for polio, or helping school-age girls in Africa isn’t enough, many students join two or more clubs.