One entire school takes a vow of silence…

“We are silent”: Students at École Glenbrook Middle School take a vow of silence to support those in the world who have no voice…

Children’s voice as a powerful tool for social change…

On May 2, a dozen students at École Glenbrook middle school covered their mouths with black electricians tape and stood in silence.

One by one they held up signs for those children in the world who are enslaved, in poverty, in war zones, without clean water, denied an education – or without voice.

With their Vow of Silence, the 13 students of the leadership club  inspired  the whole school population of more than 650 students to also make the pledge. 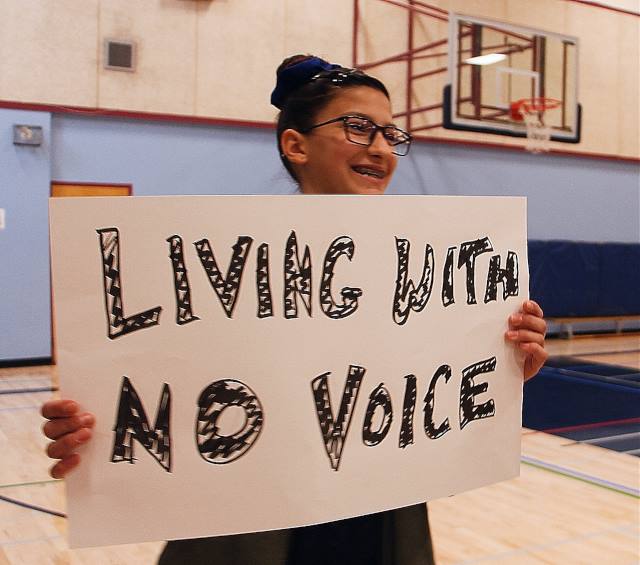 The vow was a way to recognize those children who do not have one or more of the 54 fundamental rights identified by the United Nations Convention on the Rights of the Child.

Students were silent for a block of study on May 2. They spent the time doing in-class activities highlighting the experiences of children whose rights are not protected.

Last week’s assembly marked the launch of a school-wide fundraising campaign through the ME  to WE organization to raise money to increase access to education for children.

For every $50 raised, one child will be able to go to school – giving them the tools to speak up for their basic rights.  Donations go towards the WE Villages Education Pillar of Impact.

By the next day, one class at Ecole Glenbrook had already raised $550.

Amy is a student who was in grade 6 at EGMS when she began to ask for a campaign like this to take place at her school.

Now in Grade 8, she was the inspiration behind making the event happen.

She said she knew how lucky she was to go to school, to be safe, and to have the opportunities she has in her life. She also said she couldn’t help ‘badgering’ Ms. Osborne for the chance to make a difference.

As Amy told the assembly, ‘Rights are things we need to be safe, happy and healthy and something everyone should have access to.”

She inspired her fellow students to think about what they might identify as a basic human right for all children. Their ideas included the right of access to information, and the right to be happy.

The leadership students shared video clips at the assembly of the young Canadian Joe Opatowski, who inspired the Vow of Silence initiative at WE.org before he was killed in a car accident.

They shared the story of Molly Burke, a blind Canadian student who was bullied by other school girls to the point of depression and suicide – but who now uses her voice in her work with ME to WE and internationally to inspire others.

They also told the story of Nobel Peace Prize laureate Malala, who is now 21 years old. She was a school student when she was shot on a school bus in an assassination attempt in northern Pakistan, where girls were regularly banned from school. She had become an outspoken advocate for female rights to education and was the target of the governing Taliban.

“I had two options.  One was to remain silent and wait to be killed.  The second was to speak up and then be killed.  I chose the second one.”

“We as a school have come together in a common activity that encourages all of our students to think beyond themselves,’ said teacher-counsellor Jane Osborne, who supports the leadership club. “Our students worked very hard on this campaign.”

The fundraising continues for another week.  If you wish to contribute to École Glenbrook Middle School’s fundraising efforts,  please visit their fundraising page here.