Out of this World: Giant Floor Map of Canada at Fraser River Middle School 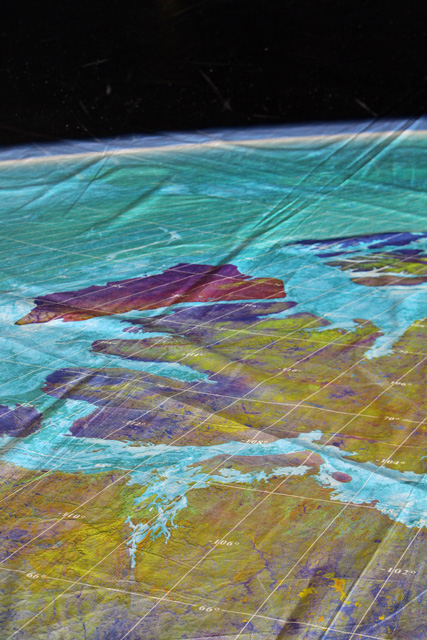 Students at Fraser River Middle School will be able to hover over Canada in space or simply walk across the country — from sea to shining sea  — starting this week.

The Canadian Space Agency’s first-ever Giant Floor Map of Canada is making the rounds of the country  –  and it’s just arrived at Fraser River Middle School.

“Fewer than a couple of dozen schools in Canada get this map every year so it’s quite rare to have it,” said teacher Jennifer Weisner. She’s teaching her middle school students about Space and in the process of researching ideas, found the Canadian Space Agency website, saw the Giant Floor Map, applied for it – and got it.

The map is made up of hundreds of images taken in May 2013 by the Canadian satellite RADARSAT-2 – and includes images taken by Canadian astronaut Chris Hadfield from the International Space Station. The map itself is a whopping 11 metres by 8 metres. It’s now spread out from coast to coast to coast on the floor of the school’s drama room, ready for classes from the entire school to check it out over the next three weeks – as long as they tread on the Earth with stockinged feet to preserve it for others to use.

“The whole school is scheduled to use it and each class will get a chance to visit it four times,” Weisner explained.

Students can explore math by measuring distances that account for curvature; they can look at the impact of pollution and natural disasters; they can incorporate history of explorations, or they can examine climate change by comparing glacial coverage on the map with more recent satellite images.

Weisner said she spends her summer dreaming of ‘glorious lessons’ that she can do with her students – and was delighted to stumble upon this kind of resource available to teachers. She not only got the green light to have the map for her space program – she also received a space trunk filled with teaching items, lesson plans  – and  tomato seeds.

As Weisner notes, while the box did not, in fact, contain an astronaut, it did contain tomato seeds for the space-related Tomatosphere research project. Some seeds have already been in space; others haven’t. Growing the seeds will allow students to determine if being in space makes a difference to growth rate and nutrition, and ask: “Can we grow seeds in space, on a space station, on another planet?” The project has already involved about 3 million students in Canada and the United States and is helping researchers gather data. Some 1.2 million seeds were launched in February of this year to the International Space Station.

The Giant Floor Map is the result of a partnership between the Royal Canadian Geographic Society and the Canada Aviation and Space Museum. The first of its kind, it was designed to spare student interest in science,math and technology.

Already, Weisner’s students have created a Space Travel Agency, with each choosing an existing feature in the Milky Way that they will feature for a travel excursion:  how to get there, the nature of the extreme environment they would likely encounter, and how they are going to survive there.

“There’s a lot of excitement about what we can do as we increasingly integrate subject matter, technology and new approaches to curriculum,”  Weisner said. 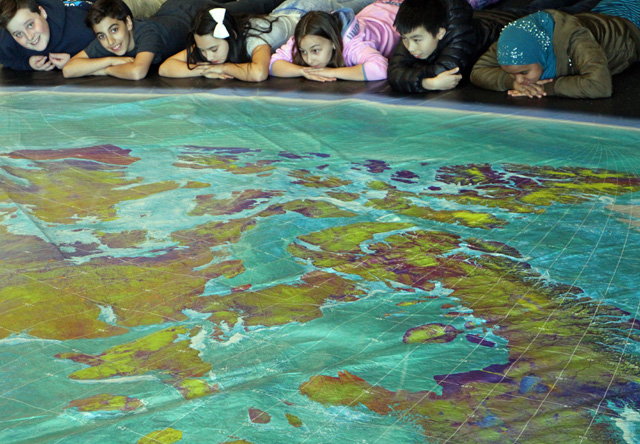