Food for Thought: Exploring the link between food and learning 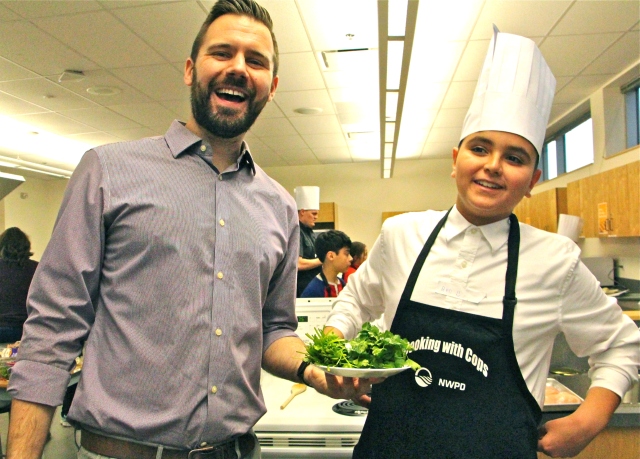 At New Westminster Schools, the launch of our Fuel Up! school lunch program is linking the conversation about food to the school curriculum and to healthy eating habits that could well inform student behaviour for a lifetime.

BC’s redesigned curriculum encourages learning from kindergarten to high school about such issues as local food and the environment; health and media in relation to food; composting and waste reduction; and growing school gardens.

Aspects of the food system can also be incorporated in math, science, social studies and more.

See the two videos below: one about Starting a Food Revolution at a school in London, England and the second video highlighting a New Westminster Schools Cooking with Cops fun event teaming up students and police officers.

Starting a Food Revolution: Inspired by Chef Jamie Oliver, a school in London has made food part of the curriculum to teach children the importance of valuing food and cultivating healthy eating habits….

Food helps build relationships: Our “Cooking with Cops” event paired up students and police officers in five teams at Fraser River Middle School recently, when they whipped up their creations and served the results to 80 guests  –  including the New Westminster Mayor and the Chief of New West Police.

December, 2018 – Students from across New Westminster Schools teamed up with New West city police officers for an evening of fun in the kitchens at Fraser River Middle School in December.

The school lunch initiative now unfolding at New Westminster Schools is of provincial and national interest.

The Education Leader is the flagship news-and-features publication of the BC School Trustees Association.

It recently featured the New Westminster Schools initiative as an example of the increased leadership role that boards of education across the province are playing in their work of improving student achievement.

The first-ever “Cooking with Cops” event was inspired by the role sharing food can play in building and strengthening relationships. Police officers serve as liaisons at New Westminster Schools to help educate youth about safety, intervene when students are at risk and support positive behaviours and healthy habits

More than 80 students from nearly all 12 schools in the district entered a lottery to participate in the event. Twenty students were chosen to form five teams, with one police officer per team.

The teams whipped up salads, Thai and Italian chicken dishes, chickpea curry, and fruit kebabs – along with a whole lot of fun.

The results were shared with more than 80 people, including families and friends – along with the city’s Mayor, the Chief of New West Police, and the Chair of the Board of Education for New Westminster Schools.

Celebrating the achievements, as recognized by three outside organizations, of some of the amazing teachers who work in New Westminster: Carmen Woo, Kristie Oxley and Barb Paul. more

It was a year full of successes, challenges and adaptation ... and the amazing things that were achieved last year have laid the foundation for this big year we're walking together in now. more

The FAQ’s on schools, COVID protocols and more

You have questions. Here are the answers. (And if you can't find it here, send us an email and we'll add to this page through the year.) more

Our online application is currently unavailable. You may apply using the PDF paper application form.