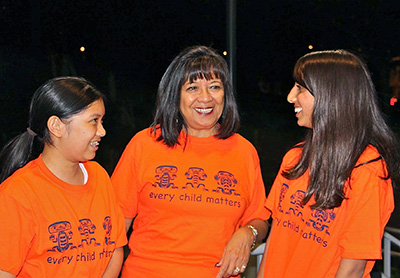 Grade seven students Gursimrit Badyal and Miranda Baron opened their hearts to the stories they learned in school of young First Nations children like Seepeetza — who at six years old was taken from her family and sent to an Indian Residential School.

There, the little girl was so hungry she hid bread and raw carrots in her clothes to eat late at night and was physically punished with other children. When her name was changed to Martha, it was another step erasing her identity and her culture.

Today, the two Ecole Glenbrooke Middle School students are wearing orange shirts because “we want to show we know what happened,”

Miranda and Gursimrit explained their commitment to Orange Shirt Day to the New Westminster Schools’ Board of Education this week. Orange shirts are a symbol recognizing the harm to Aboriginal peoples in Canada from the Indian Residential School system. More than 150,000 children attended 139 residential schools throughout the country; at least 6,000 died while in attendance. The last school closed in 1996.

In their class with teacher Candy Etheridge, Gursimrit and Miranda also learned about a crisis of suicides in a northern Manitoba community that had been making headlines. Both of the students struggled to understand why.
“We started talking about the way abuse can be passed down from generation to generation…..about shame that led to more pain. And we started talking about the way things could be made better,” Gursimrit told the board this week.
The t-shirts capture the memory of a young girl named Phyllis whose orange shirt was taken away, along with her feelings of worth and self-esteem, when she entered residential school at Williams Lake in north-central B.C. One of the key messages of the shirts is that every child matters. Schools across the district are embracing the event.

A Keen Sense of Justice…

‘One of the reasons I love teaching this age group is that they have such a keen sense of justice,” said teacher Candy Etheridge.

She inspired her students to plant a ‘heart garden’ at Ecole Glenbrooke Middle School in the spring to honor the Indian Residential School survivors, as well as those who died in school. For Etheridge, it is critically important in her teaching to promote an understanding among her students of Canada’s relations with First Nations.

“I grew up in the northern Manitoba, in The Pas on the Saskatchewan River,” said Etheridge. “On the other side of the river was the reserve and in the summer I would go to sleep with the sound of drums coming across the water,” she recalled.

Her experience at the time was of a culture of deep-rooted racism specifically targeting Indigenous people. Her home community made national headlines following a conspiracy of silence surrounding the long unresolved murder of 19-year-old Helen Betty Osborne who was abducted and brutally murdered near the community in 1971.

“It is not a beautiful past,” said Etheridge. While noting that students can find third world conditions faced by many First Nations communities right here in Canada, she also seeks to ask: where do we go from here?
“Reconciliation is a process that is forward thinking,” she said.

Board chair Jonina Campbell noted a remarkable shift in the messages children are beginning to learn in school and told the two students: “You live in a world that has a lot of work that needs to be done. But you are also part of the solution.”

Along with the two students, Chief Rhonda Larrabee of the Qayqayt First Nation in New Westminster also attended the Board of Education meeting this week. She welcomed the board to her Nation’s traditional territory and spoke in support of Orange Shirt Day.

Chief Larrabee’s mother, aunt and uncle were the last few living members of the Qayqayt First Nation, which once numbered 400 people before their lands were sold and their reserve was deemed inactive in 1951.
“My mom didn’t tell me she was sent to residential school until I was 24,” Chief Larrabee told the Board. “She told me once and shut the door; I could never talk to her again about it.”

Instead, Chief Larrabee was brought up in the mainstream culture thinking she was of French and Chinese heritage because her mother was ashamed of her Aboriginal identity. Chief Larrabee’s journey of self-discovery led her to apply for Indian Status in 1994, resurrect the Qayqayt Band, become chief, and work to keep the legacy of her ancestors alive through education. Her story is captured in the award winning National Film Board of Canada documentary “A Tribe of One.”

“I am trying to make my mother proud.”

Sharing her story with the school children of New Westminster has had a major impact, board members and visitors told her. Both Gursimrit and Miranda had a chance to meet Chief Larrabee at the meeting.

New Westminster Schools have an important role in reconciliation…

“We have a great team supporting the capacity of kids and families to feel welcome and included in the district.”
She highlighted for the board Justice Murray Sinclair’s statement that education was the primary tool of the oppression of Aboriginal people — and that reconciliation with Canada’s Aboriginal peoples can begin in schools, where the harm through mis-education was originally done. Sinclair was the commissioner of Canada’s Truth and Reconciliation Commission, which heard from more than 6,700 witnesses about the damage they experienced in the Indian Residential School system. The Commission in 2015 made 94 recommendations urging a move from apology to action in Canada, starting with education.

Landsdowne presented ideas for actions that can be taken in New Westminster Schools to strengthen the process of restoring friendships and repairing harm.

She urged teacher and student engagement with truly authentic resources – books and resources created by British Columbia First Nations, presenting authentic First Peoples’ voices and themes that are important within First Peoples’ culture. She drew particular attention to the interactive e-book Project of Heart as suitable for all ages and “ a good place to start.” Lansdowne noted that the district has in fact acquired a large selection of authentic and age-appropriate resources for use in Kindergarten through grade 12.

Lansdowne also highlighted the upcoming exhibit of the Witness Blanket – a nationally recognized monument to Residential Schools. It will be in featured at the Anvil Centre for a showing from December 2016 through to April 2017.
“We are very lucky to have this exhibit come to New Westminster,” she said. The blanket features more than 800 objects collected from residential schools, churches and families from across Canada as a way to recognize the atrocities of the Indian Residential School era and honor the children. The exhibit will include school tours.

School board trustee Casey Cook said it was important for the New Westminster Board of Education to move beyond talking about the general intent of the Truth and Reconciliation report. “We should look at the recommendations and talk about their applicability to this district: what does it mean to us?”
Landsdowne said that reconciliation with Canada’s Aboriginal Peoples is complex and requires full and active commitment from everyone.