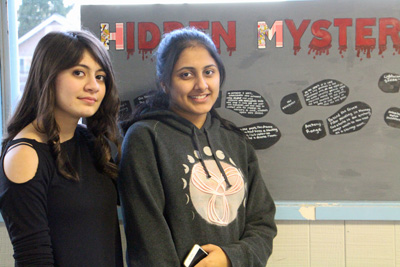 Hidden Mysteries: Following a path to the past with Ruhma Babar and Simran Grewal

Jan. 26, 2017 – Alexis Greenwood, Simran Grewal and Kavin Giroux may be among the last group of students to pass through the well-trodden halls of New Westminster Secondary School before it is replaced by a new school in 2019.

But that doesn’t mean they can’t leave a legacy.

Teachers Jenny Simpson and Dragana Sacco merged their English and Art classes together for a semester-long project inviting nearly 60 grade 10 students to “think of their path at NWSS” and how their presence leaves an imprint.

The result was “Site Stories” – a public exhibition this month showcasing their work of experimental art that challenged viewers, students, and teachers too, to rethink their school.  The project was funded by the NWSS Parents Advisory Committee, an Artists in the Classroom grant, and ArtStarts, a non-profit organization that promotes arts and creativity among youth.

Out of the box and out-there art…

Led by installation artist Mark Cunningham and performance artist Julie Hammond, students explored the meaning of art as more than a framed painting on a wall – and the school as more than an outdated building. 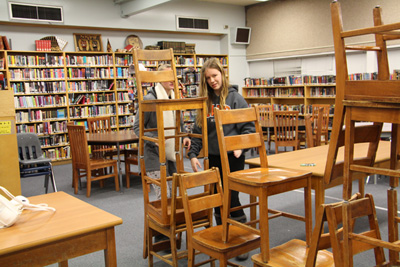 “I think there was a a lot of skepticism at first,” Simpson notes.

Students were introduced to videos of art that showed “ice being dragged through a city as it melted.”   They walked in small groups around the school with their eyes trained on the ground.  And they stacked wooden chairs in the library into precarious towers and debated the results as sculpture.

Julie Hammond asked students in December as they prepared their projects:  “Can a pile of junk be art?  Or do you want the viewer’s response to be uncertain?  And what do you think is the relationship between art and change?”

Simpson found that “eventually, students started wanting to do out-there art and grasping the idea that this was out of the box.”  Whether creating soundscapes of the NWSS cafeteria and gymnasium or writing about graffiti, the exhibit became “a bit of a love letter to the school.,” Simpson said. 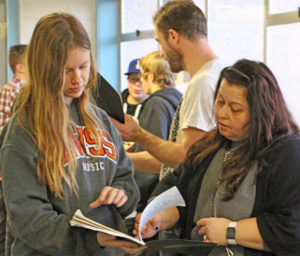 Student Alexis Greenwood explores a conversation between Art and English for her “Site Stories” exhibit in consultation with teacher Dragana Sacco.

Simran Grewal and her fellow artists Ruhma Babar and Ladan Pourkaveh were fascinated by the ‘hidden histories’ of  NWSS – the forgotten voices, the rumours, and the paranormal.

Their exhibit depicted a trail of footprints, each print revealing a snippet of the past – such as the lightning strike and evacuation of 2007; the drama room “dungeon” that used to be a shooting range for the military; the tuberculosis incident; and the ‘boy in the basement” ghost story.

“NWSS may not be beautiful but there are a lot of stories and memories and history  that go with it,” Grewal said. 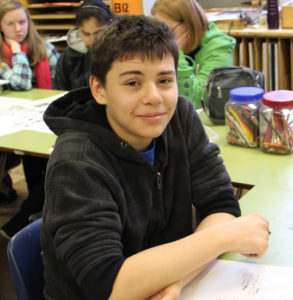 Students conducted research for their projects by visiting the school’s archives, looking at old yearbooks, and touring contemporary art galleries.

They also welcomed special guests like Chief Rhonda Larrabee of the Qayqayt First Nation. whose visit was a highlight of the term. She touched on the concept of being very nearly erased from place when she explained why the Qayqayt do not have a ‘land base’ and how this has affected their ability to maintain a presence in New Westminster.

In a way, Kavin Girouxs’ art work also depicts erasure: he placed seeds in the snow to form the word “Hunger” on the soccer fields and then snapped photos as birds ate the food. The word eventually disappeared from sight.  Could  it be that the school itself, like the seeds, will be consumed by time? The answer to that, as Giroux notes, is that art is open to each individual’s interpretation. For Giroux, his artistic exploration is a metaphor for famine and and the hope that survival can be achieved through the sharing of knowledge.

The distance in the hallways…

Alexis Greenwood thought the distance between classes was intriguing – particularly as the  legendary hallways of NWSS stretch from one end of the school to another for the equivalent of several city blocks  When she first started at the school, she found she often got lost.  Her map now depicts NWSS not  in terms of north, south, east or west – but in terms of footsteps:  138 steps between the library and the English and Science rooms; a whopping 237 seps between “Foundations for Success” classrooms and the drama room…..

A leap into something different…

For Simpson, engaging in a cross-curricular project merging English and Art together raised questions not only about art, but about the evolving nature of teaching.   Both English and Art disciplines  try to make sense of the the world, and combining the classes allowed for a conversation between the two disciplines. Students engaged not only with graffiti as art but as social statement.  They expanded the concept of art to engage with sound and the history of sound, while exploring the role of technology in shaping how we hear and interpret sound. 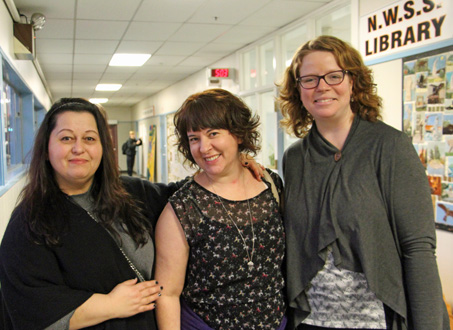 For Simpson, the process was a “leap into something different as a teacher.”

“I found I had to let go of control with the artists coming in to take the lead. I became a student, too, taking notes of what we learned, letting go of ‘prescriptive learning” and becoming more aware of the unknown in the learning process.  As teachers, we played more supportive roles while also determining how to assess  student learning, and how to ground our work in the new curriculum with its emphasis on inquiry-based projects. Ultimately you’re responsible while at the same time you have to let go of what’s happening. There were logistics involved, but we saw how students could be very self-directed.”

For student  Alexis Greenwood, the experience was enlightening.  “I never really realized why an English class could be combined with an art class – but I have .a whole new perspective on art,” she said.