Have you ever watched someone get covered in slime? The students at FW Howay Elementary school have! Right after their annual Halloween parade, the students squealed with joy as they watched their Principal, Sarah Phelan, get covered in sticky, lime-scented slime. 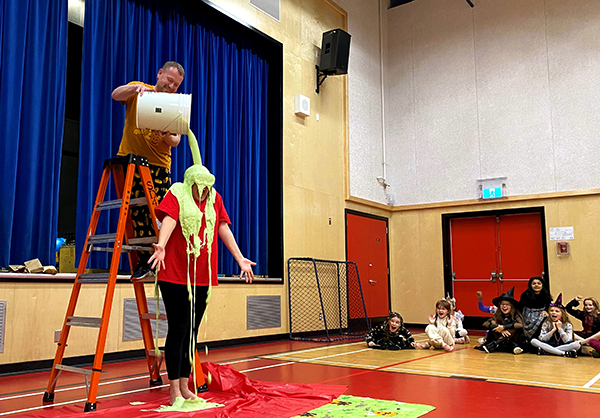 Mrs. Phelan volunteered her participation as a reward for a lot of hard, caring work. The stunt came after an immensely successful month-long charity event, led by teacher Janet Dupuis: Socktober. Socktober’s mission was simple: to collect as many socks as possible through October. These socks will be donated to the Lookout Society, which, in addition to other work, operates a New Westminster shelter in that supports unhoused people in our community.

Janet says she’s been working on projects like this with students for over 15 years now, as part of the “Howay Helping Hands” group that picks different projects each year.

By all accounts, Socktober has been a winner.

Students helped however they could. Many brought in new socks to donate, and others helped by creating posters to cover the hallways of the schools. Three particular grade 5 students, Thera, Elena, and Vallerine, went above and beyond to help: making massive posters to spread awareness, and counting and recording the progress of donations as they came in. When asked why they wanted to participate, the three simply responded “It feels good to help people.” 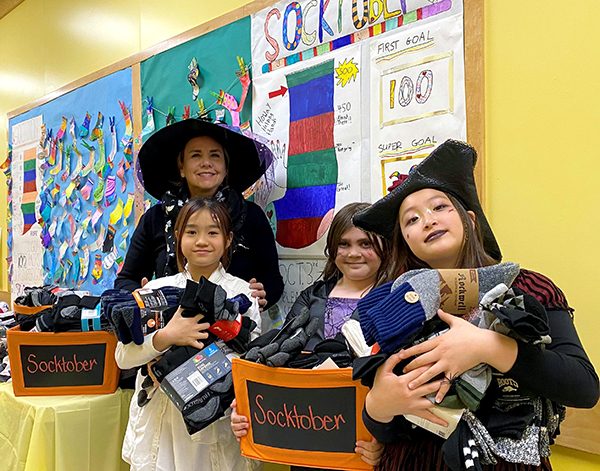 And help people they did!

Their goals was initially to gather 100 pairs of socks, but the FW Howay students blew past that quickly. Then, it was upped to 200, but they cleared that with ease too. Finally, a new, more ambitious goal of 500 pairs of socks was set, to really challenge the school community. By the end of the month, the students at Howay had brought in nearly 600 pairs of socks!

Having promised that she would get covered in slime if they surpassed the 500 sock goal, Mrs. Phelan stood there and took the sliming on Halloween, in front of a gym full of gleeful students. We even hear she tossed in a bonus surprise by wearing a pink wig the next day, to honour the effort made by staff and students.

The socks will be donated within the next few weeks, with the three students helping make the delivery to get a better idea of people living here in our community – making the winter feel just a little bit warmer for all.