Standing for Truth: A Call to Save Residential School Records 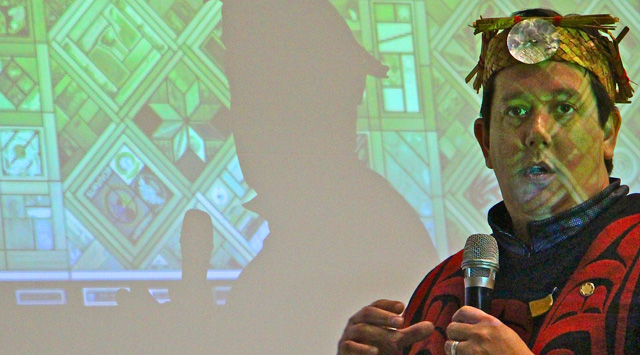 Artist Carey Newman was a keynote speaker at New Westminster Schools in February. Here, he stands in front of a projected image of his nationally celebrated art installation project, the Witness Blanket, honoring the children of the Indian Residential School era.

He’s the creator of a “National Monument” to residential school survivors; he was the keynote speaker for a New Westminster Schools event highlighting Aboriginal perspectives in learning – and now he’s fighting to protect Canadian history.

Stand for Truth Campaign – May 25. You can help!

Artist Carey Newman is Standing for Truth. And he is calling for others to do the same.

The Coalition for the Preservation of Truth is appearing before the Supreme Court of Canada May 25.

It will advocate for the preservation of 40,000 stories - the largest collection of firsthand accounts of residential schools. These records are due to be destroyed in 15 years.

The campaign is raising money to cover the cost of legal fees. To make a donation and learn more, visit: Stand For Truth

New Westminster Schools teachers,staff and supporters are invited to contact Laura Newman, District Cultural Facilitator, at lnewman@sd40.bc.ca. She is offering to make a collective donation on behalf of SD40. Or:

VISIT THE PEARSON OFFICE TO MAKE A DONATION: SEE GINA. ALL PROCEEDS GO TO THE STAND FOR TRUTH CAMPAIGN!

Artist Carey Newman created the “Witness Blanket” – a national treasure made up of 877 objects from 77 communities across Canada.

A child’s moccasins; a piece of a door; braids of hair; a belt: each tells a story associated with children who experienced the atrocities of the Indian Residential School era.

And each was integrated into the large-scale cedar-wood “Witness Blanket” that honors the children and symbolizes the need for reconciliation in Canada.

The Indian Residential School system separated 150,000 First Nations, Métis, and Inuit children from families and communities. It also separated them from  their language, culture, spiritual traditions and collective history.

Over the course of a century, more than 6,000 children died in an education system that was critical to a national policy described as “cultural genocide.”

Reconciliation in our public schools…

The Witness Blanket was on display in New Westminster at the Anvil Centre  from Dec. 5 to April 28 as part of its ongoing national tour. During this time, Newman addressed more than 400 New Westminster Schools teachers, administrators, and staff at  a professional development event in February.

As the keynote speaker, Newman offered his insights as the district begins to integrate Aboriginal culture and perspectives across all areas of learning in BC.

“A blanket in my ancestral traditions uplifts the spirit, protects the vulnerable, honors the strong.  The Witness Blanket is for survivors and the children who never came home, for the displaced and for the parents afraid the truth would affect their children.

Newman said the experience of making the Witness Blanket changed him.  And he hopes the spirit that lives in the objects entrusted to him by survivors for the project “will command our attention and push us all towards change.” 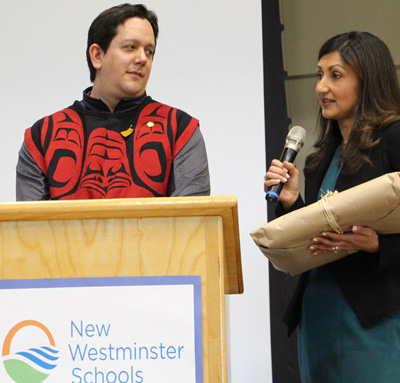 Newman was in Ottawa when the Truth and Reconciliation Commission (TRC)  released its landmark report in 2015 after hearing six years of testimony from nearly 7,000 witnesses about their residential school experience.  The TRC made 94 recommendations with the goal.of repairing the relationship between aboriginal people and the rest of Canada.

One result: the history and legacy of residential schools is now part of the Canadian education curriculum, thanks to the work of the Truth and Reconciliation Commission.

For Newman, the challenge of reconciliation is captured in the image of the Raven, “my favorite bird.”

“To take flight, both wings to have work together.  Both wings have to be equally strong. We are all in this together.”

He described his own conflicted experience as a child of both Aboriginal and European descent, whose father survived residential school.   “I am part settler and part indigenous.I am the colonizer and the colonized. I’m part of the colonial system that led to the problem in the first place and I’m indigenous, carrying the deep scars caused by that same colonialism.  This has brought the issue of reconciliation close to my heart.”

But, he said, “we need truth before reconciliation. We can’t look at reconciliation as an act of charity. Clean water, educational parity: these are basic human rights. They are starting points for reconciliation. But it’s more than socio-economic opportunity or consultation or access to resources.

“Reconciliation means a recognition of the colonial mindset that allowed former British Colonies like Canada to claim sovereignty over Indigenous territories and impose mass displacement. Unless reconciliation comes with the power to make our own decisions about our lands and resources, unless it is built on  level ground, the cycle of dependency will continue, and reconciliation will be nothing more than a band-aid. 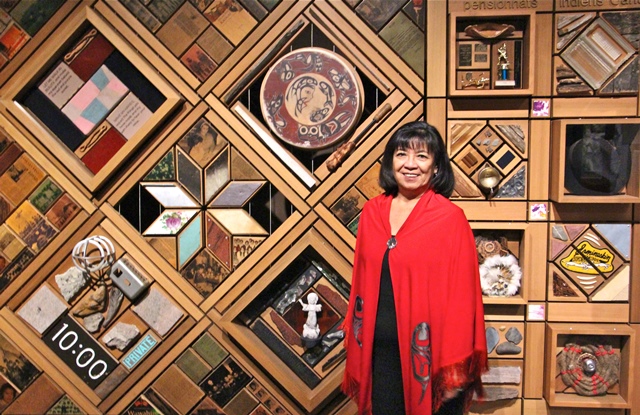 Chief Rhonda Larrabee has won recognition for the Qayqayt First Nation from all levels of government in Canada and actively advocates for First Nations education and services in New Westminster.  Her mother was a residential school survivor.

Newman is now among a group of survivors and intergenerational survivors – the Coalition for the Preservation of Truth – who will appear before the Supreme Court of Canada on May 25, 2017 to advocate for the protection of the records of residential school survivors.

These records collectively represent nearly 40,000 stories of the more than 150,000 Indigenous children who attended Canada’s Residential Schools. They were collected as part of the Independent Assessment Process, arising from the Indian Residential Schools Settlement Agreement to resolve claims out of court. They risk being destroyed in 15 years.(Read more here).

Newman said these records “speak to the trauma that still reverberates through our communities today.”

The Coalition recognizes the ongoing impacts of intergenerational trauma and acknowledges that future generations have a right to know the content of these documents. It is seeking to preserve these documents while honouring individuals’ rights to privacy.

Stand for Truth: A Call for Support…

Newman’s cousin Laura Newman is New Westminster Schools’ District Cultural Facilitator supporting Aboriginal students at the secondary school level. She assists in the delivery of the district cultural program for kindergarten to grade 12. 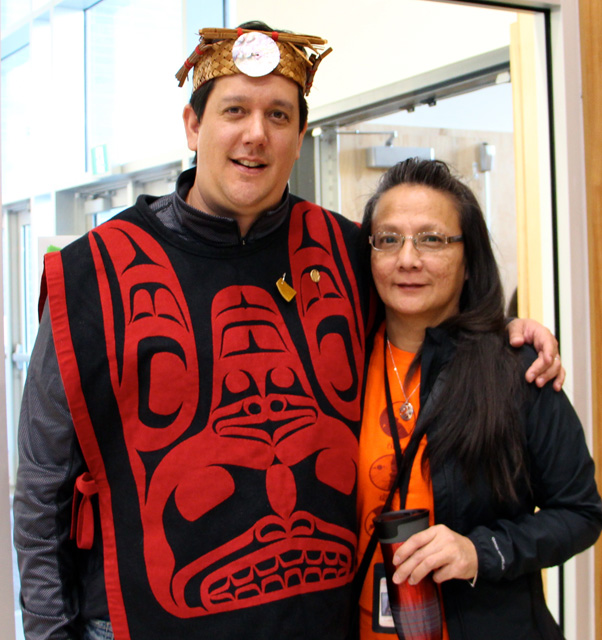 She is calling attention to the “Stand for Truth” campaign in the hope that people will support the preservation of the documents and the rights of Residential School survivors.

Laura Newman invites those who are interested in making donations to visit the Pearson Office and see Gina about the donation jar; or to make a donation via interoffice mail to Laura Newman; or to contact her here and she will arrange to submit a collective donation on behalf of teachers and staff at school district 40.