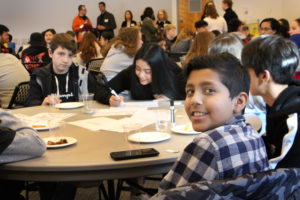 The topics ranged from mental health to vaping. The participants ranged from slightly nervous middle schoolers to outspoken teen mentors in their last few months of high school. And the adults – the teachers, school trustees and the Superintendent – they sat at a table in the back, ready to listen.

Student Symposium 2020 was hosted by the school district, but the day was presided over by four of New West’s up-and-coming leaders: Brianna Haiduc, Jalen Bachra, Rebecca Ballard and Sierra-Rose Hand. And, under the supervision of teacher Stacy Brine, a large committee of teens from the NWSS Student Voice group planned the day themselves, led the sessions and guided kids from across the District in a wide series of discussions – 30 kids from NWSS, 15 from each of our three middle schools and two teens from RCAP.

Those wandering the room heard snippets of stories, reflections and concerns being shared. Kids thoughtfully discussing the realities they were facing, the resources that helped make some of it easier and the list of issues they hope will be addressed to improve their experiences.

According to the four leaders, “the student-led approach created discussions where the kids were so engaged that they were almost talking over each other” … feeling safe enough to share personal stories and excited about the commonalities that connected them.

Throughout the day, breakout groups took careful notes that documented the discussions. And those notes are being presented to New West’s Trustees and District staff to help make sure our kids’ voices and ideas are part of the considerations as next year’s budgets and priorities are set. 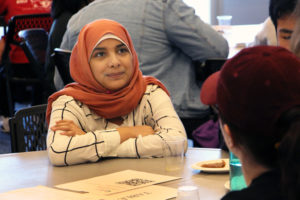 Teacher Stacy Brine said this event – now in its second year – marks an important shift in showing how the district is valuing student voices, “Getting students engaged in discussions about issues that matter to them is difficult. We think we know what they need, but we don’t often give them a chance to speak for themselves. And they have great ideas. So this opportunity to connect around issues that affect them, it’s how we can help them be more successful.”

The teens echoed that sentiment, commenting that “sometimes it feels like our opinions don’t matter. But here we have a whole bunch of students who are just excited they can change their experiences in their classrooms and at their schools.”

The young leaders also laughed as they suggested that part of what helped make the day extra special was that they were just awesome. We tend to agree. 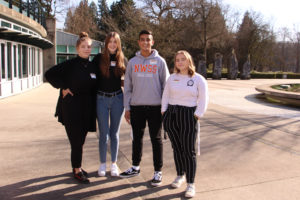