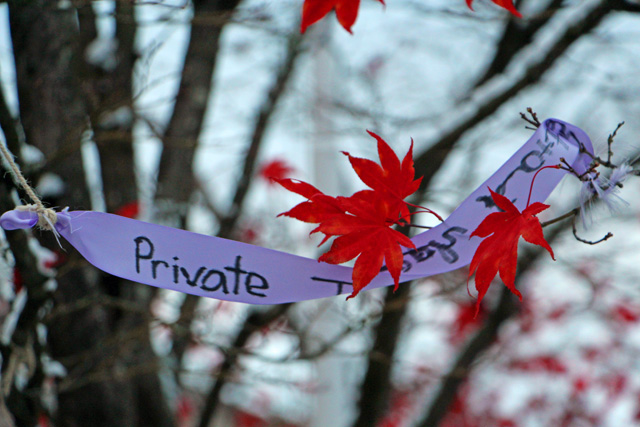 Coming to grips with the price of war…

Ribbons tied to the nearly leafless maple trees and fluttering  at the front entrance of New Westminster Secondary School raise the question: who are they for?

And who put them there?

The  names written on dozens of multi-coloured ribbons –  Private John Elliott, Private Vincent Misinishkotewe, Captain Thomas Chères and Corporal William Forbes Guild –  are those of soldiers who died in the First World War.  Three weeks ago, the students in 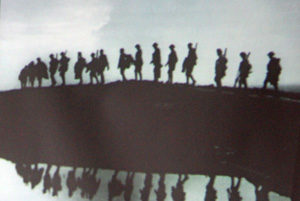 Mike Parker’s Grade 10 Social Studies class festooned the branches after researching each of the names that now stir in the winter breeze.

Parker’s students  have been asking if Canada’s role in the First World War was worth it.  And in coming to grips with that question, they found themselves confronting  the price of human life.

One of the challenges Parker notes is that most students have no real point of reference: what does it mean for 67,000 Canadian soldiers to die, and another  250,000 to be wounded in a total war that cost millions of lives?  Canadians in battles like Ypres, Somme, Vimy and Passchendaele fought valiantly in muddy trenches, faced unimaginable hardship, and experienced heavy death tolls. 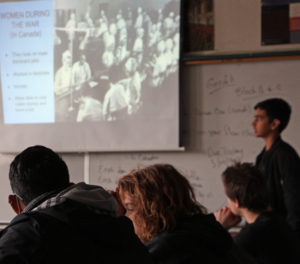 “In order to understand who some of these people were, we first needed to have names to get information from various websites,” Parker explained. “I found a spreadsheet naming the dead from the battle of Vimy Ridge.  We then took those names and researched information on the National Archives websites.

“There, you can find the attestation papers that provide information about volunteers who completed the forms  when they enlisted,” Parker explained.

These were clerks, farmers, tailors, fishermen, steam engineers, and insurance agents.  The National Archives contain papers for most of the 640,000 soldiers, chaplains and nursing sisters who served with the Canadian Expeditionary Force – along with official war diaries that recount a regiment’s daily activities in the field, including information about deaths, patrols and other incidents.

“One fellow we looked at was 16 years old:  he was underage. Others joined up and within a couple of days were killed.  Some we found had been born in Wales, others in America.  The question of where people came from and why helps form a deeper understanding and respect for what happened. It  sheds  light on the era and on the political, economic and social change the country was experiencing.” 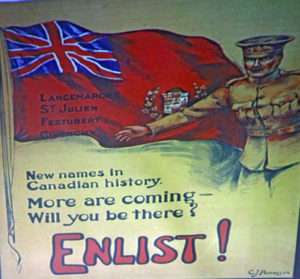 Parker  said the recent emphasis in the BC curriculum on the inquiry process invites students to address open-ended questions and form their own opinions as they do their research. In addressing the question: How did the war affect Canada, students also asked: was Canada’s role in the First World War worth it?

In their collaborative presentations incorporating slideshows and images, many students found the total war effort for the young country of Canada meant that women entered the workforce; that income tax was introduced, laying a foundation for the country’s evolving social services; and that Canada became a recognized independent voice in the League of Nations. Some students also noted the role of propaganda, the differing experiences for immigrants and Aboriginal peoples, and the social costs of war.

Parker, who has taught at NWSS for 15 years, is a history buff who has visited many of the places he teaches about. At Vimy Ridge two years ago, he visited the trenches and the tombstones that mark the place of so much loss. While history requires constant re-examination from multiple and changing perspectives, Parker said of his experience  at Vimy:  “It was a huge and tragic effort. But it’s history. It happened. And we can’t hide from it.” 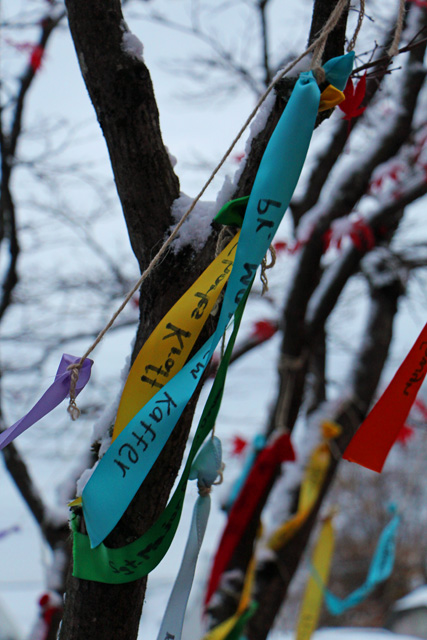