What do socks have to do with fish? FW Howay kids have the answer! 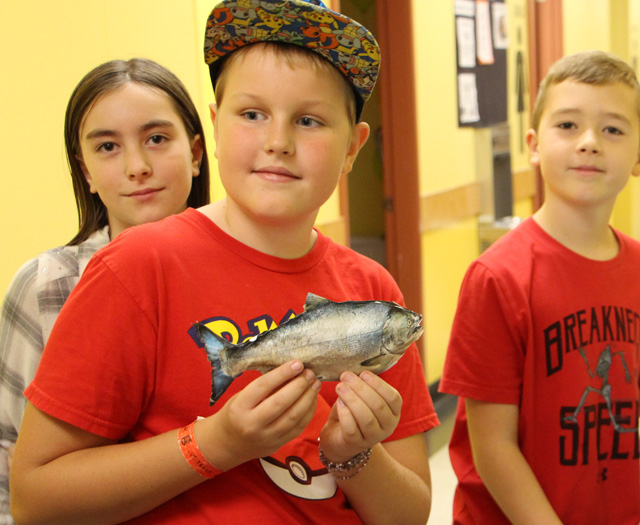 Anna, André and Kai are leadership students at F.W. Howay elementary school,  where helping hands are making a difference.

Something fishy happened at FW Howay! How did Socktober end with a Kiss?

The goal for “Socktober” was to gather 600 pairs of socks. The reward was to help homeless neighbours in New West stay warm by donating socks to the Lookout Society. The fun was to take up Principal Jamie Sadler’s challenge: If F.W. Howay kids could surpass the 600-pair-of-socks goal, Mr. Sadler would KISS A FISH.

With nearly 826 pairs collected, Mr. Sadler’s fate was sealed. On Tuesday, October 31, in front of a jam-packed gymnasium, the deed was done. And here’s the proof, thanks to school witnesses – 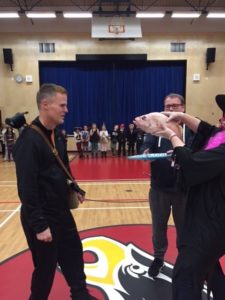 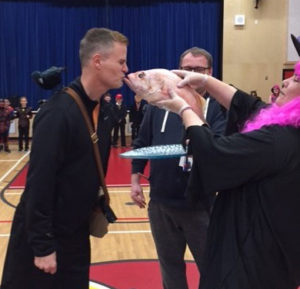 “Phyllis the Fish was the most foul smelling, ugliest and revolting fish I have ever encountered!” concluded Mr. Sadler. “Even with all the Halloween candy in possession, NOBODY was able to spare me a breath mint!”

But that’s not all!  Because the helping hands at F.W. Howay were so enthusiastic, students came close to their super-goal of a thousand pairs of new socks for donation to the Lookout Society. Sighed Mr. Sadler: “So I also agreed to have my hair streaked to recognize Howay students’ efforts.”

On Oct.31, his hair was ‘traumatized with a shock of gold” to mark the sock collection feat for feet. By Nov. 1, Sadler noted with evident relief that his hair was back to its more natural state. 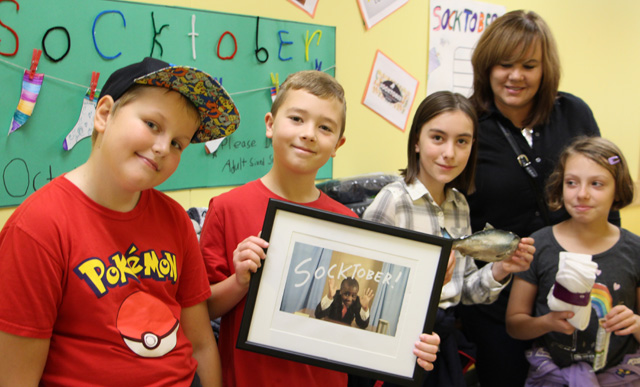 Anna, Isla, Andre and Kai are Grade 5 members of F.W. Howay’s Student Council  who have been helping lead the Socktober campaign.

Isla explained that every year, F.W. Howay kids do a winter clothing drive for the homeless. But this year, the goal was to collect socks for the Lookout Society, which serves New Westminster and other communities in Metro Vancouver.

The focus on feet, as fellow student council member Anna noted, is because “socks are the last warm item of clothing that people donate.”

“And feet are also the part of the body that get the coldest,” added Kai. All four students are helping to deliver the socks to the society.

Teacher-librarian Janet Dupuis notes that students at F.W. Howay have learned that everyone who is homeless has a story and that many people can end up going through rough patches.

“No one chooses to be homeless. The kids realize that a person may lose a job, a spouse or a child; they may be in a car accident, go on medication and be unable to work. Some just have bad luck.”

She said that kids in the city understand that neighbours in New West who are homeless are part of our lives  – and that helping can make a difference. During the winter months,  the Lookout Society cares for and serves more than 2,500 people each day at its shelters, housing and support programs. In New Westminster, for instance, the Rhoda Kaellis residents has 24 apartments for those with a history of homelessness, mental health issues, and substance abuse.

The awareness among F.W. Howay kids about the needs of people in their own community, the city and globally has been deeply embedded in the school’s culture for more than two decades – in part thanks to the dedicated work of teacher-librarian Janet Dupuis.

“We can do it because we are a small school and because the whole school makes it happen,” said Dupuis. She lives in the neighbourhood, her kids attended F.W. Howay, and she has been teaching in the school for more than two decades.

“Social justice is a passion of mine and because I teach in the library, I am consistently able to reach the whole school. ”

That means when F.W. Howay takes on a project, the commitment is remarkable, consistent – and long-lasting

For instance, the school over the years has collectively supported a child in Mali, Africa named Yacouba — from his childhood until he graduated from school.  As Dupuis observed, some Howay students have grown up with Yacouba throughout their whole elementary school lives thanks to the Howay Helping Hands World Vision project. The school is now supporting a new student in Mali – three-year-old Robert.

She notes that students leave the school with a sense of citizenship as they go on to high school and beyond.  “They will look for clubs on global stewardship and they often come up with great ideas for fundraising. It’s so inspiring, how much they truly understand.”

She noted that the concept of inclusivity is a key component of BC’s new curriculum introduced into schools last year, and that an emphasis on social responsibility supports an understanding of what inclusivity means.

Dupuis has used the book “Have You Filled a Bucket Today?” by Carol McCloud to encourage children that when they do something kind for another person – filling someone else’s bucket – they also fill their own with happiness. “They learn that they can impact another person’s life and that it starts with them.  They can help in their own community or far away.”

F.W. Howay is also a member of the “We Schools” program meaning students are encouraged and empowered to take action on issues of importance to them.  The four grade 5  leaderships students – …Anna, Isla, Andre and Kai – all participated in “We Day,” a major event in October with 20,000 other students at Rogers Arena that encourages children to “shift the world from ‘me’ to ‘we’ as they learn to become global citizens.