A hidden child of the Holocaust: NWSS students meet a survivor 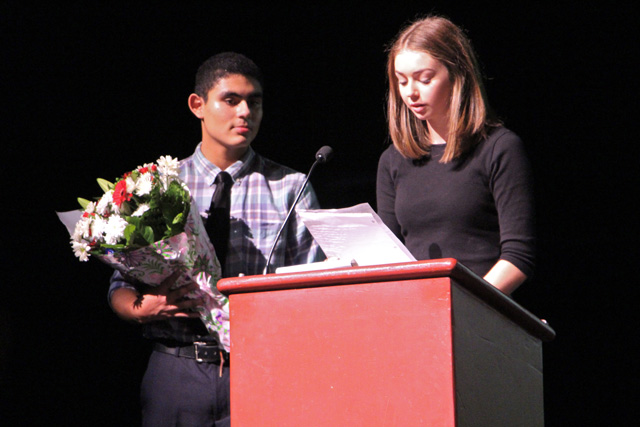 Student hosts Matt Forero and Scotia Cookson shared their insights after hearing from a child survivor during the Second Symposium on the Holocaust at NWSS.

NWSS Second Symposium on the Holocaust: The risk of looking out a window….

For NWSS student Scotia Cookson, learning that a child risked death for the simple act of looking out a window speaks volumes about the darkest chapter of modern history.

“Your right to see the world was taken away,” she told Dr. Robert Krell, a child survivor of the Holocaust who is now a Professor of Psychiatry at the University of BC.

Dr. Krell shared his childhood memories with more than 1,000 grade 10 and 11 students at Massey Theatre last week during the second NWSS Symposium on the Holocaust,  with Cookson and Matt Forero acting as student hosts.

As a Jewish child, Krell was hidden from age 3 to 5 with a Christian family in Holland during the German Occupation to avoid deportation to the death camps – where six million Jews of Europe were systematically murdered during World War Two.

The child’s dark curly hair in a family of blondes was a dangerous give-away that could lead to his death, as well as the death penalty for his Dutch caregivers for sheltering a Jew.

Cookson called Krell’s experience  “a reminder of how the Holocaust was a time when the brutal nature of stereotyping, prejudice and racism overtook humanity.”

Krell explained that the liberation of Holland with the end of World War Two was a time of jubilation – but for Jewish children like himself who were separated from their parents, hidden, and who survived, it most often meant they were orphaned and that their entire families had been murdered. “Death was all around. I walked the streets of The Hague and virtually no one came back. The murder rate was over 80 per cent.”

A warning against hatred…

Krell – and his parents  – survived, but as he discovered in his new life as an eager immigrant to Vancouver in 1951, and later as a child and family psychiatrist, the experiences of children whose families survived the concentration camps would continue to haunt their daily lives.

Cookson said in hearing his story that it was ‘imperative that we study and learn from history to avoid repeating past mistakes.”

For Forero, the contrast between Krell’s childhood and his own spent playing with friends and family is a stark reminder that not all children have had the same rights as he has had. He said students have a “tremendous opportunity to exert our rights as human beings” and that experiences like Krell’s are a “reminder and warning against allowing hate to enter our communities.”

The NWSS students are among the last generation of those who will have the opportunity to meet a survivor of the Holocaust more than 70 years after the end of the Second World War. 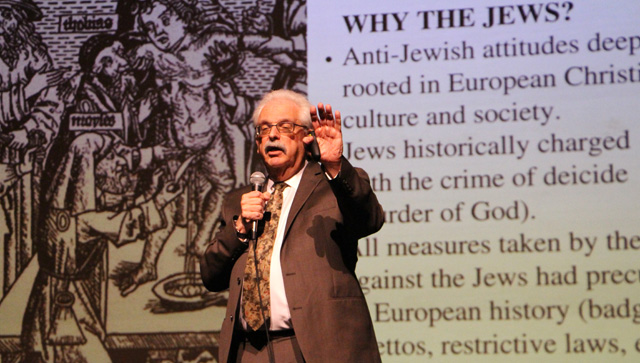 Students who lined up during the symposium panel discussion asked thoughtful and penetrating questions that touched on issues such as Krell’s experience of anti-Semitism in Vancouver and Canada, to the role of ordinary people in mass murder.

As former teacher and long-time Holocaust educator Kit Krieger explained, the “war on Jews” by Nazi Germany incorporated the use of technology, propaganda, mass communication and a bureaucratic approach to genocide.

The Holocaust was a time when doctors turned from healing to killing, when architects and engineers used their talents to design efficient death camps; and when highly educated people with doctorates devised a “Final Solution” to eradicate an entire race of people from Europe.

“In thinking of the enormity of what happened in the most sophisticated and cultured country of the time, you have to know: if it happened there, it is possible anywhere,” Krieger said. 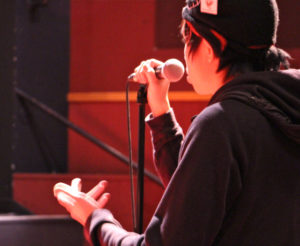 In answer to a perceptive question about the link between the trauma experienced by Holocaust survivors and PTSD,  Dr. Krell noted that Concentration Camp Survivor Syndrome would lay a foundation for what is now is understood as PTSD – post-traumatic stress disorder.

As a child and family psychiatrist in Vancouver, Krell found that concentration camp survivors were increasingly bringing their children to him, and that these children were struggling with depression or learning disabilities. Meanwhile, survivors typically refused to talk about their experiences, fearing they might harm their children Their nightmares, flashbacks and depressions became known as ‘concentration camp survivor syndrome.”

Dr. Krell noted that most children have no or few early memories. “If everything is okay, what is there to remember?” he asked.  But when the unusual happens, “well, memories begin to stick.”  Krell held up a childhood toy on the stark stage in front of the students and explained, “In psychology, we call this a transition object. Teddy bears and blankets are comforting things that take the place of a caring parent. To me, this toy represents my losses.”

Through his work, Krell helped identify new fields of research focusing on the Holocaust  experiences of hidden children and the children of survivors. He also helped found the Vancouver Holocaust Education Centre, which has now documented over 200 local survivor stories since 1985, including concentration camp survivors, child survivors, and those who survived in hiding or as partisans. Dr. Krell also delivered the keynote address at the United Nations Commemoration of International Holocaust Remembrance Day in 2012. 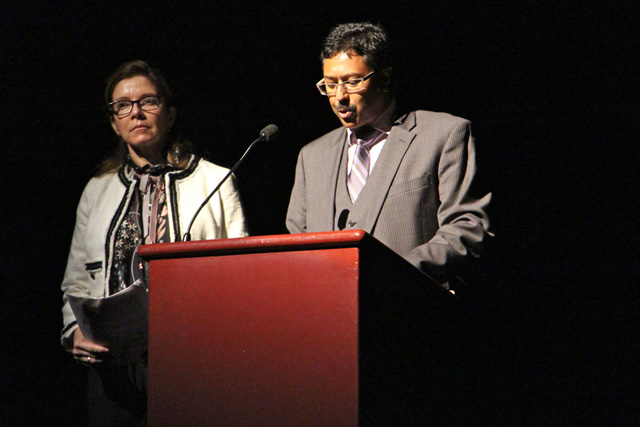 A Commitment to Students and to Social Justice…

For New Westminster Secondary School Vice-Principal Randy Jaggernathsingh, the Holocaust Symposium at NWSS was not only the 13th high school event he’s organized with the Vancouver Holocaust Education Centre – it’s also part of a steadfast commitment to ensuring students have a chance to meet living eye-witnesses of the Holocaust.

“Just hear and listen. That is the message,” said the longtime history and social justice teacher. 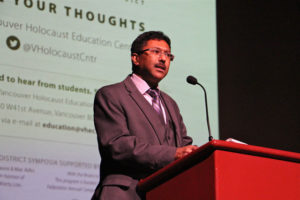 That’s what he did several decades ago when he visited Anne Frank’s house in Holland. Like Krell, the world famous young diarist was also hidden in a house in Amsterdam as during the German occupation of the Netherlands. In her case, she and her family were found out and sent to Auschwitz and then to Bergen-Belsen concentration camp, where Anne Frank died.

Jaggernathsingh said the experience in Anne Frank’s house changed his life. “I knew I had to do something.”  In 2012, he was acknowledged with the Kron Sigal award for his commitment to working with the Vancouver Holocaust Education Centre in bringing survivors to meet with thousands of students.

As a teacher, Jaggernathsingh said insights for students of the Holocaust Symposium  touch on all aspects of history and social justice. They reveal how the same terrifying issues are not consigned to a more distant past but are also happening now –  in Syria, in Somalia, and in Burma (Myanmar) where the Rohingya people are currently subject to mass atrocities and fleeing as refugees.

They  can also help arm students against untruths. “If you ever in your life run into a person who says the Holocaust did not exist, you can say: I met a person who was there. I know it happened.” And an encounter with the history of the Holocaust equips students with understanding about the nature of discrimination against any group  – and the critical call to civic engagement to ensure it does not happen again.