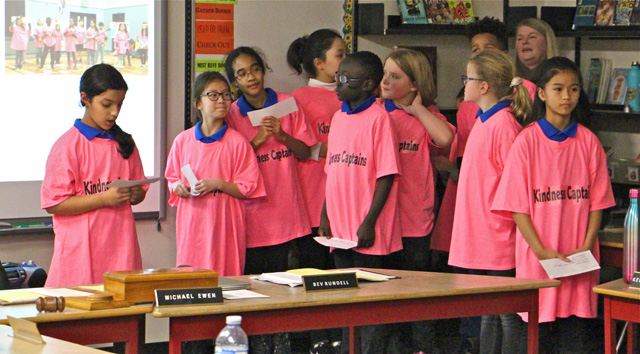 The “Kindness Captains” at Richard McBride elementary speak in front of parents, teachers and trustees. They are part of a school culture that recognizes how everyone treats each other has a powerful effect on classroom performance and school climate.

Setting a goal for the whole school…

February 14, 2018 – One by one, the student “Kindness Captains” of Richard McBride elementary school  stood up in front of parents, friends, teachers, and  school trustees last month.to speak their “power word.”

That’s the one thing they hoped to feel each and every day they come to school.

For one student, it was joy. For another, it was calm. For others, it was to feel included, welcomed, accepted, proud.

They also addressed the question: What would they do to make such positive feelings happen? Students might offer help if someone is in distress, include others in their games, or think how someone else might feel.

Their answers reveal McBride as not only a kind and welcoming place – but one that recognizes how students feel affects how they learn.

Every one of the student voices shared at a Board of Education committee meeting last month was evidence of an important shared journey unfolding at McBride School – one that is happening at each of the district’s schools in their own unique ways.

A culture shift from the old way of doing things…

In a jam-packed school library, Principal Kathleen Chad explained to trustees how every school in the district began talking 18 months ago about adopting a school goal that could shape its direction for possibly years to come.

For each school, the journey is different – depending on its unique strengths, and its answer to the question: what kind of school do we hope to be?

As associate Superintendent Karim Hachlaf explained, the process of goal setting is a significant culture shift from the traditional approach.

“The classic goals of improving literacy and numeracy are still fundamental – but schools were now identifying what springboards they may need to support students in achieving those goals,” said Hachlaf.

Hachlaf said the process guiding each school’s learning plan has been ‘authentic, dynamic and driven by the community rather than by a template.”

“What impresses me is the range, flexibility and customization I am seeing in each school community.  It’s different for each, it’s innovative, and it’s a shift from the old way of doing things.”

School-wide spirit: Brushing up the view!

The school-wide spirit that infuses Richard McBride is evident in the portables that were ready for the 2017-2018 school year.  Teacher Angela Jurgensen  – who has experience painting large scale mural projects in other cities – organized all the students in the school to create Portable Art that not only brushes up the view, but is part of a journey toward stronger student engagement…

Choosing a goal that makes a difference…

Knowing what direction to take when starting a journey can be a challenge. At McBride last year, the quest to shape a school goal took a 180 degree turn early in their discussions, Principal Kathleen Chad explained.

“After many conversations and opportunities for feedback,  we decided to focus our energy on increasing student engagement through ‘social and emotional learning’,” said Chad.

A diverse committee was formed to help guide the process in a thoughtful, systematic way. That included selecting criteria to ensure they were about to set out on the right path.

The group decided, for instance, that they wanted a common language and approach to social and emotional learning for the whole school.

They wanted a ‘big idea’ approach that would allow teachers autonomy to incorporate their own tools and programs to support the goal.

And they wanted something that was research-based, with proven effectiveness.

And so their journey began: in reviewing programs,conducting research, and visiting schools and neighboring districts.

Eventually they found their own unique answer. 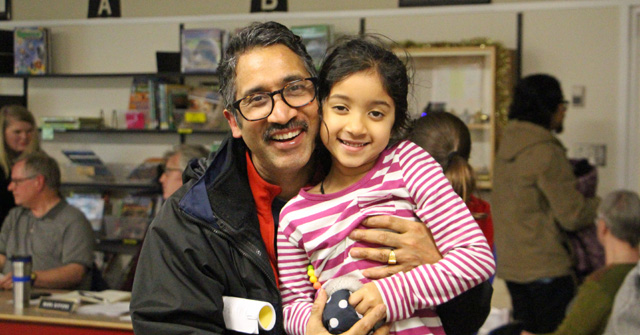 As Richard McBride students themselves have stated in their hallway posters: “We are learning to understand our emotions and solve problems peacefully.”

The significance of the Anchors of Emotional Intelligence program lies in the RULER approach to social emotional learning. Children learn to recognize their emotions, understand them, label them by giving names to their feelings; express them and regulate them. Understanding their own emotions improves their readiness and ability to learn.

The program provides evidence-based tools to support the school journey: the Charter, Mood Meter, Meta-Moment, and Blueprint. Each is based on scientific research and each helps children and adults develop their emotional intelligence skills.

“So far we have developed the first two tools on what is a multi-year journey,” Chad said.  “We want to do this carefully and effectively.  Helping kids understand that emotion is a continuum and that we can make choices helps kids to be effective learners.”

The Richard McBride school community has also benefited from direct training with Vancouver-based UBC doctoral candidate Miriam Miller, a consultant and coach for The Yale Center for Emotional Intelligence. She will be returning to McBride in March to meet with parents.

Each school is modelling what they hope for their students…

By January, Richard McBride school had just completed charters — collaborative documents helping each of the classes in the school establish supportive and productive learning environments.

Children and adults have also completed a whole-school charter as well as a staff charter.

Each document is created by the classroom, staff or school community and each outlines how they aspire to treat each other, guided by three questions that include:

“Our kids have done a tremendous amount of work,” Chad said.

As well as creating their charters, student leaders at an assembly in December presented videos they had made of their fellow students responding to the question: what do you love about our school.

Trustee Jonina Campbell congratulated the students for their work.

“I teach a lot about kindness and respect. But you are empowered to do that for yourselves and with all the other kids in the school. It’s all of you who are doing the groundwork!”

For staff, their own charter articulates how they as adults want to feel when they come to school. As with their students, each staff member expressed their own hopes: to be acknowledged, accepted, connected, or supported.

Richard McBride Parent Advisory Committee chair Jacque Killawee told trustees that the impact of the program,  thanks to a ‘dedicated group of teachers,’  was evident.

“This group of staff is absolutely fantastic,” she said. “This school is giving our students what they need.”

On the right track…

As Chad emphasized for the trustees, the school goal process is a long-term commitment.  Each school will be asking: how they will know the direction they are taking is the right one and that their goal is having an impact?  How will they know when they get there? What strategies will be used to assess progress?

Maryam Naser, New Westminster Schools’ Director of Instruction, noted that  “some of the learning that is now occurring in schools is around the questions of “How do you use data?” and “How do you collect it?”

“This is new to many of our teachers, and they are becoming more involved in the process as an inquiry project,” she said.

Some schools have developed questionnaires around student engagement. Some have outlined a number of activities for which they can measure the outcome. Further, each school is citing resources and research in its School Learning Plan that inform its goals and plans.

Both École Lord Tweedsmuir Elementary School and Queensborough Middle School, for instance, have adopted the Growth/Mindset Model which is based on insights into learning and intelligence informed by an understanding of brain plasticity. The model includes lesson plans, case studies and insights on how teacher practices impact student mindsets and achievement.

In addition, a district team with principals and vice-principals from different schools periodically visit school sites – helping all schools to hear and learn from each other.

For the entire district, as staff described to school trustees, it’s been a “powerful process to engage in these conversations.”

Said Chad: “This is the beginning of the journey at Richard McBride. We are all looking forward to seeing where this takes us…” 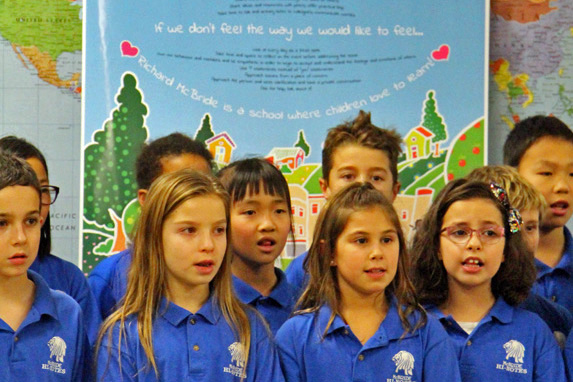 Richard McBride Elementary School’s Hi-Notes choir sang songs at the School Board’s Education Committee meeting in January that capture the spirit of their school: “We each deserve a place where we can count on a warm and friendly face…”