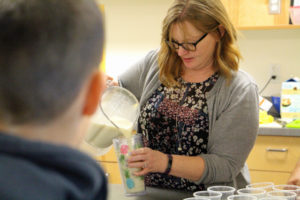 September 2017 – At the last board meeting of the 2016-2017 school year, Board trustees directed district staff to report on the steps and costs associated with a “district-wide plan…that will make available food programs to all of our schools so that no child is hungry and every child is eating healthy food.”

As trustee Jonina Campbell explained at the June board meeting, the goal of addressing food security and healthy eating may be a high expectation. But she said it’s one that the district can aspire to in moving beyond ‘stop-gap measures’ to make sure kids aren’t going hungry. That’s particularly the case when poverty can affect children even in affluent areas. The board passed the motion unanimously.

In preparing its report for January 2018, New Westminster Schools launched its Food Review Survey  during the first week of school. The survey invites families to describe their interest in a food program, the type of program they would like to see, what they would be willing to pay, and if they are willing to have some of the costs go towards helping subsidize a child or children in need. The survey will run until September 25, 2017.

The district is also conducting site surveys of each school and gathering information from staff, food service providers and other school districts for insights on best practices and related costs that can help inform decisions about a possible district-wide plan.