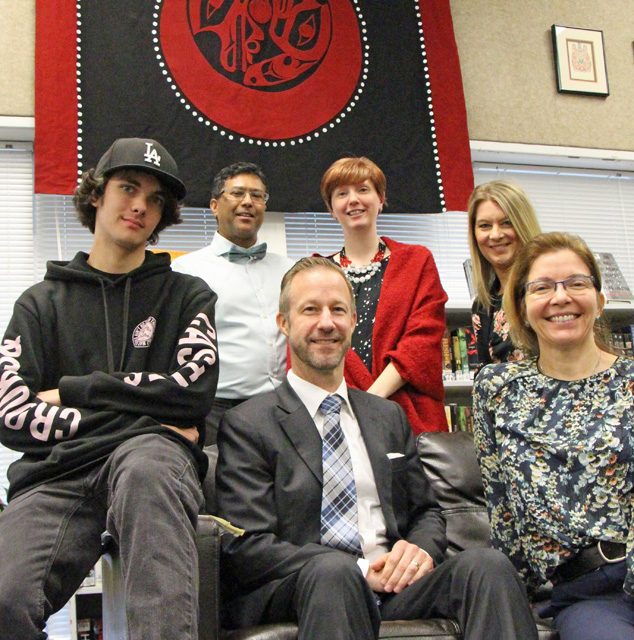 Recognized as one of Canada’s 40 Outstanding Principals for 2018, John Tyler, NWSS Principal, credits administrators, teacher and staff for their willingness to “create a  flexible space where all students  can learn no matter where they are at in their lives…”  Tyler is pictured here with student Eric Callaway and NWSS Teacher-Librarian Lorena Jones, along with VPs Randy Jaggernathsingh, Sonya Rondestvedt, and Laura Roberts in the back row

January 31, 2018 – John Tyler, Principal of New Westminster Secondary School, has been named one of Canada’s 40 Outstanding Principals for 2018.

The Learning Partnership honours principals from across Canada for exemplary leadership and recognizes the “unique and vital contributions of principals in publicly funded schools.” The announcement was made today.

The 40 principals are nominated by parents, colleagues and community members and are chosen by a national selection committee. They are celebrated for demonstrating innovation, leadership and for employing creativity in finding solutions and opportunities within their school communities.

Tyler, who assumed leadership of one of BC’s largest and more diverse schools in July 2016, restructured Learning Support Services at NWSS to make learning more accessible for all students.

He also champions digital learning, supporting the evolution of the library to a Learning Commons, and incorporating makerspaces, 3D printers and several hundred laptops. As a result, students have more and more opportunities for innovative, creative ways to demonstrate learning in any number of academic subjects.

Tyler will be celebrated with co-winners in Toronto February 27. The honourees, including three other principals from BC, will also benefit from a five- day executive leadership training program at the University of Toronto’s Rotman School of Management. The Learning Partnership is a charity dedicated to enhancing publicly funded education.

“It’s definitely humbling,’ Tyler said following the announcement today.  “It’s an honour to be recognized but it speaks to my team and the teachers’ willingness to create flexibility for meeting the different needs of our students” on their individual pathways to success.

In one of the largest high schools in the province, that can be a challenge.

“It takes time and energy,” said Tyler.  But he noted the evidence is everywhere – in the willingness of an International Baccalaureate teacher to accommodate the unique needs of a top student who also faces demands as a football player, or in the Performing Arts where teachers have created a unique stage technician course that connects student learning to the field and is outside the traditional box of course offerings.

“It’s creating the room where teachers can provide those flexible opportunities for learning beyond the more traditional approaches,” he said.

He noted that despite the fact that the high school is slated for replacement by 2020, there are “fantastic pockets of learning” and major progress in moving forward ‘while we are waiting for a new school to be built.”

A true example of a 21st century leader…

Lorena Jones, an NWSS teacher-librarian for the past eight years, called Tyler ” a true example of a 21st century leader,” and described him as a “technology savvy, relationship driven, life-long learner.”

She  also said he was an informed and thoughtful risk-taker in making change.

“The first thing I remember about him was his talk called “Fine-Tuning through Failure,”  she laughed. In taking risks, he learns and adapts.  “He’s a model for our students….” 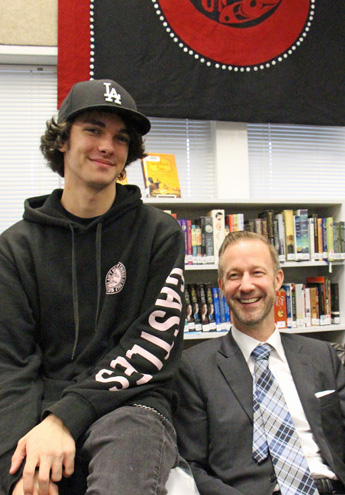 For Grade 11 student Eric Callaway, “Mr. T” has created new opportunities he might not have otherwise have had.

In fact, with Tyler’s support, Callaway was able to create a new position at NWSS as the “learning technologist”  a formally recognized course created especially for him to explore the new technologies in the school  – such as 3D printing, sphero bluetooth robots, and more.

Callaway’s growing expertise with the technologies allows him to provide support for both teachers and fellow students.

“It’s unique to this school.  This really works for me,” said Callaway, who also said he had faced some learning challenges. “After this course, I realized I was good with technology. Mr. T’s been a big help for me over the past two years.”

An influence well beyond NWSS…

Kit Krieger, Executive Director of the BC Principals’ & Vice-Principals’ Association, was among those who supported Tyler for recognition by The Learning Partnership. He said  Tyler’s influence “ranges well beyond New Westminster Secondary School.”

Krieger noted that Tyler represents BC’s 2,300 principals and vice-principals on the Teachers’ Council of the Teacher Regulation Branch of the Ministry of Education, which is charged with responsibility for the standards of certification in BC, and the review of BC’s nine teacher education programs, among other responsibilities.

“He is the only principal on this committee and one of only fourteen educators holding this immense responsibility,” Krieger wrote. Krieger said he was impressed with the way in with Tyler had guided a review of standards for the education, competence and professional conduct of educators, and worked to achieve consensus among diverse stakeholders.

Tyler also proposed, set up and moderated a series of webinars to engage principals and vice-principals throughout the province, helping to support members in more remote regions.

Krieger said he found great respect among the staff at NWSS for the ‘breadth of Tyler’s knowledge, his work ethic and the strength of his community and leaderships skills.”