Where the rubber hits the road..

Queensborough Student Faith Villareal has no shortage of ideas for conserving water. And now her message is set to roll out across the city.

Villareal was in grade 5 last year when her poster on water conservation won the City of New Westminster’s 2016 Environmental Poster Contest.

This week, she saw her colorful poster mounted on the sides of a city collection truck.

As it rolls through the city collecting greens, garbage, and materials for recycling in the coming year, it will also be getting Faith’s message out:

It all adds up to less — at least, when it comes to water consumption. And residents in New Westminster can be inspired by Faith’s ideas just by keeping a sharp eye out for a colourful city collection truck. 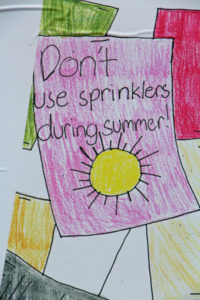 For ten years, students in New Westminster’s elementary school classes have participated in a “wonderful partnership between” the city and district schools to highlight environmental issues – from recycling  to climate change.

“It’s been a perfect opportunity to educate our kids about environmental  issues that often directly relate to work the city is doing in this area,” said Betina Wheeler, New Westminster Schools’ community program development officer.

When it comes to environmental education, it’s often the kids who teach the families, encouraging them to recycle or save energy, said Jennifer Lukianchuk, the city’s environmental co-ordinator.

That was the case for Faith, who took her school environmental challenge home to her family of four.  “We talked a lot about how to conserve water,” said her mother, Roselie – with one of the biggest impacts being the  family’s move to the five-minute shower

The Environmental Poster Contest has been the highlight of the district’s partnership with the city, which runs in March and April annually, building on the annual Earth Day event of April 22..

This year’s contest – the 10th of the poster awards – is focusing on energy conservation and continues the tradition of helping ensure student voices are heard.

One poster winner from Lord Kelvin Elementary School currently has his artwork incorporated in the City of New Westminster’s current Master Transportation Plan.   Other students win the opportunity for their classes to take field trips. A visit to the city’s landfill site in Delta, for instance, can be an eye-opener that changes student understanding of their environment.

Part of the program also includes free in-class workshops for participating classes. Community organizations – like Green Bricks or this year’s BC Sustainable Energy Association – visit classes and provide workshops on environmental curriculum based on the theme of the year. 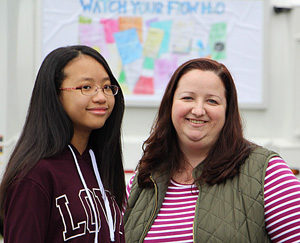 Starting next year, however,  the partnership will put more emphasis on teacher and student-driven approaches to environmental issues.

“It’s time to change it up a bit,” said Wheeler. She noted BC’s new curriculum emphasizes the development of ‘core competencies’ in students, one of which is social responsibility. The new curriculum also seeks to engage students in their own learning.

The shift from an emphasis on posters to Incorporating mutli-media tools such as videos is one way to engage students. 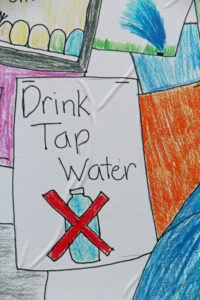 For Scharf, the project involved ‘letting go of control’ of a more traditional approach to teaching and allowing students to identify their own ideas as they researched the issue.

“We are so used to controlling what goes on in the classroom when it comes to learning criteria and end products,   In this case, I let the kids lead and tried to just see where it would take them. It was much more open-ended.  I’m taking that approach in my classes more and more. It’s worth the risk!”

The city’s Jennifer Lukianchuk noted: “Our goal is to make our community aware of the importance of caring for the environment and some of the initiatives and activities that kids and families can do.  Brochures and websites are one way to reach an audience, but personal interaction can make a difference.”

As the city begins the process of developing an Environmental Strategy this year, the partnership between the City and New Westminster Schools promises to be an enduring one.