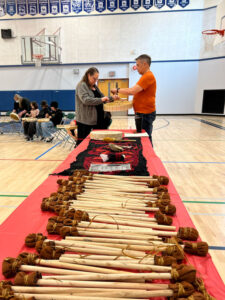 It started with an idea. It involved a powerful book and some cultural learning. And it ended in the start of a new community connected through the beat of a drum.

This project was a collaboration across the leadership at all three middle schools, and involved all learners at all grade levels.

For most students, it was the collective reading of one shared story: When We Play Our Drums, They Sing, by Richard Van Camp. The book tells the story of 12 year old Dene Cho, a boy who is angry that his people are losing their culture. But through a conversation with an elder, he learns more about the impact of residential schools, and he begins to find himself. And he begins to realize that understanding the past can help change the future.

Each student and each class reflected on this story in different ways.

Where this project got additionally interesting is where it expanded out to offer Indigenous identifying students an opportunity to build on the cultural teachings and experiences that were touched on in the reading. 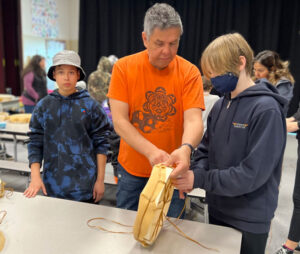 The three schools pooled and shared resources (with QMS students joining those at GMS) to learn about and each make their own drum … with hands-on lessons from delivered by Roslyn Smith and supported by Lee Laufer, Jasmine Tannahill, Danielle Smith and Orlena Ferguson. The team worked to teach students how to stretch elk skin over the round frames and use the artificial sinew to pull tension and tie the drums.

On May 19th the participating students from Queensborough Middle and Fraser River Middle gathered alongside the Glenbrook Middle School students for a drum birthing ceremony, under the lead of Ms. Roz and with support from other members of the Indigenous Education Team … also with administrators, District staff and Stacey Ferguson – representing the Qayqayt First Nation – there to  witness and support the ceremony. 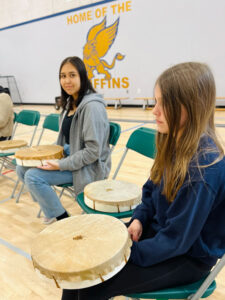 The drums were distributed to students sitting around the circle created in the middle of the gym. Students held their creations while they heard teachings about why drums needed to be rebirthed before they could be played … the process of bringing life back to the living elements they had been created from. Ms. Roz drew connections to the beat of the drum and the first rhythm we each hear: of the heartbeat of a mother that a baby hears in the womb.

And then the more formal portion of the ceremony began…

A smudge to cleanse the bad energy away, with medicines to also invite the good in. 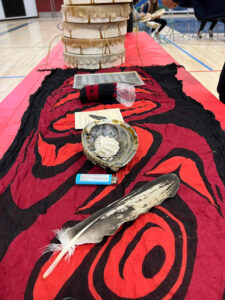 Next the umbilical cords were snipped down to length … a reflection of that connection to womb and the birthing process. 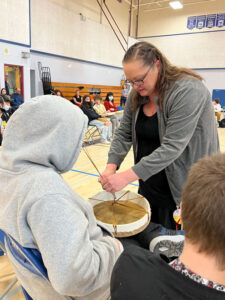 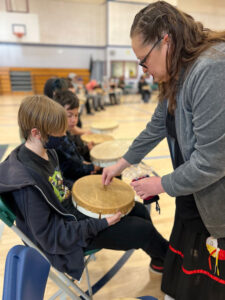 Then a small pinch of tobacco was placed on each drum, so that as Ms. Roz circled the root to beat the heartbeat into each drum, the surfaces danced as the vibration was passed from one to the next.

Each student carefully collected their small pile of tobacco and took it out to find a patch of soil … thanking the creator (however each student defined that), as they returned the medicine to the land. 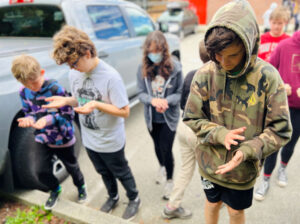 These ceremonial steps were completed one stage at a time, each student waiting patiently as the circles of the room were completed … a process that included the drums taking up empty chairs to ensure that even those who couldn’t attend the day would have their drums birthed. 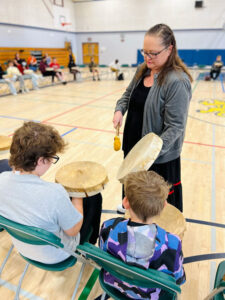 And, finally it was time to play … to hear the sounds of each drum’s echo and practice together, with Ms. Roz leading them through songs and rhythms as they tested out their newly birthed creations. 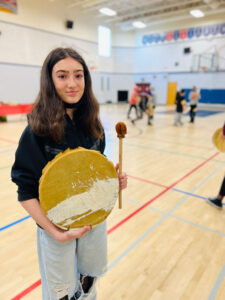 What was easy to see was this: there was pride and excitement on the faces of many of those students as they looked around at each other and shared the occasional whisper and smile.

That was one of the other goals that Chris Evans (hosting Principal at the GMS birthing ceremony) spoke to as the day came to a close: that this project was also intended to create connections for Indigenous students in the District … an opportunity for each student there to hopefully have at least one more familiar face at NWSS, when it was time for them to  transition to the secondary school.

And on that note, with some extra tips on how to care for or later potentially decorate their new drums, students headed back to their schools and classrooms … owners of new drums and a little more connected through culture and the shared experience.